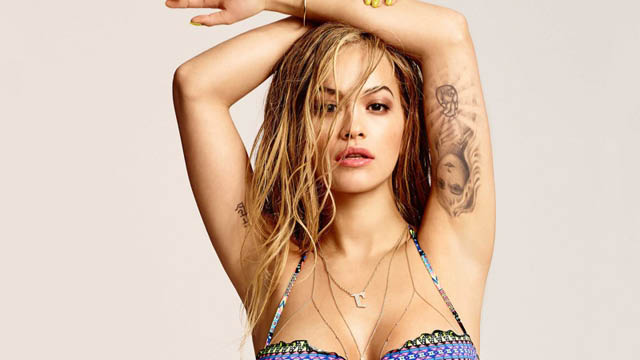 In true supermodel style, Rita Ora is the ultimate beach babe in these super hot swimsuit images. We just heard news of the release of the Kendall + Kylie Jenner swimwear line at Topshop and we are almost thinking that Rita Ora could have also got in on the action.

The 25-year-old singer shows off her impressive figure (and tattoos) in bikini styles from Tezenis ranging from the classic triangle shape to pushup bras with tribal patterns. Rita sports a wet hairstyle with a dewy makeup look and touch of peach lip colour. Finishing the look, Rita wears a yellow manicure with a chain necklace featuring ‘R’ for Rita.

This isn’t the first time Rita Ora has stripped down for Tezenis. In 2015 Rita Ora was the face of their sultry lingerie campaign which saw Rita flaunting her toned figure in lace underwear and bling-y gold jewellery. From a sequin-embellished t-shirt to a bomber jacket, the blonde smoldered in the sexy images. And in 2014 Tezenis removed one of it’s knickers from sale which read ‘crime scene’ pants from Oxford Street store after backlash over ‘rape‘ connotations.

The knickers were initially spotted by Twitter user Rhiainj and posted by her friend Natasha O’Neill, who described them as “disgusting”, while another condemned them as “gross, sexist, and nasty”.

User @urbananchoress wrote: “Nothing celebrates the female body like having female sexuality equated with a ‘crime’”.

Other users criticised what they described as the implication of sexual violence evident in the words crime scene, with one writing: “I think the implication is rape, isn’t it?”