Flavour Magazine had the wonderful opportunity to interview the director of new British movie ‘Pimp’ which is due to be released May 21 2010 viewers get the chance to be a part of the film so to speak as hidden cameras shadow the Soho Pimp day to day routine. Flavour chats to lead character Woody played by Robert Cavanah, as well as Wil Johnson who plays Byron. The movie also features distinguished British actors Billy Boyd and Danny Dyer.

How was the transition from actor to director?
Certainly don’t think it was a big deal, the job seems to take care of itself. Being a producer and a writer I’ve done for a long time. I don’t think it was a tricky job at all. In fact I was surprised at how easy it was, the only thing I thought to be tricky is working with people you haven’t worked with before.

Do you have a preference between acting or directing if at all?
I don’t think I have a preference, but if prefer anything about either side of it, I think what I prefer is having the control as a director, as an actor you’re doing whatever you’re told. I was really relieved that suddenly I was getting a chance to direct and I thought if I don’t, I’m going to end up in crap telly for the rest of my life – I had to make a change.

How hard is it to balance, fatherhood, travelling abroad for your career and acting?
I haven’t travelled abroad a lot in the last 2years while I’ve been making the film, I’ve gone to Spain on holidays with my boy and that’s about it. I’m a pretty-hands-on Dad, I spend a lot of time with him and that’s really important to me. I’m going to do a film in September-October up in Scotland a thriller and their talking about maybe editing in LA and that would be about 3 months that makes me a bit nervous because he knows that his Daddy is always there. I’m going to encourage them not to do the post –production abroad if I can help it! I’ve been very good in managing my schedule around him so far.

Who did you most enjoy working with in Pimp?
I wouldn’t choose anyone over anyone else but I’ve got a particular soft spot for Billy Boyd, I’ve worked with Billy a couple of times before. Everyone brought something really nice. I’d love to work with him as many times as possible.

We read that you sing also, any plans to record a single or album?
[Laughs hysterically] What do YOU think?! Not a chance! I actually thought at one point about sneakily putting my vocals on a song on the soundtrack, but not telling anyone, I thought that would just be a step to far you know?

Looking back on all your roles and appearances which did you most prefer and why?
I enjoyed playing Woody and doing Pimped more than anything I’ve ever done, that’s because to a certain extent I was able to control the atmosphere on set and bring the energy that people enjoy working with.

Who inspires you, who are your greatest actors and actresses?
Anyone that I can look at that can do something that I don’t think I can do. I quite admire French Actor Daniel Auteuil he’s brilliant. I’m friends with Gerry [Gerard Butler] I’m a big fan of his. Martin Compston – he’s in my film a great little actor, he’s very much on the rise. He’s only 25.

Sahara and Tomb Raider are, would I be wrong in saying two of your biggest films? What was it like to work with Angelina Jolie?
Two of the biggest budgets, bigger budget but smaller parts. I went in for the lead, but i knew that Gerry Butler would get it because he had been offered it already. Angelina she was lovely – the thing that I remember most about her is her kids and that she’s a really devoted mother. I have very good memories of her.

What’s your favourite British Soap Drama series?
I have to say I don’t really like any of them! I think there all boring to me. On the other hand I know the actor Jake Wood [Max Branning] I think ‘My god that’s pretty quality stuff!’ I never even followed Eastenders when I was in it! I played Vickie’s older boyfriend also, Scarlett Johnson [Vickie Fowler] I was so impressed with her, when it came to doing Pimp years later I had to get in touch with her and said I would love to get her in the film. 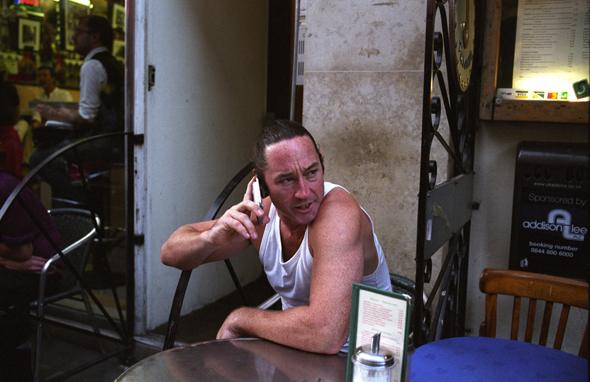 Any good films you’ve enjoyed of late?
Sin Nombre – a Mexican film about gangs. I watched Kick Ass last week, Ahhhh I’m telling you one it’s of the funniest best films I’ve seen in ages! Kick Ass is genius. Gotta watch that. Me and my boy were watching a Tim Burton production called ‘9‘which is an animated film, promised my son tonight to watch the rest of it, it’s really sweet.

Which do you prefer, Film TV or Theatre roles?
I don’t have any preference, but as long as the works good. I do think that television is a bit more restricted, however I do have a couple of ideas for TV Shows that I want to create, ones a gritty talk show, and the others a sci-fi show inspired by American television, I think American television is brilliant.