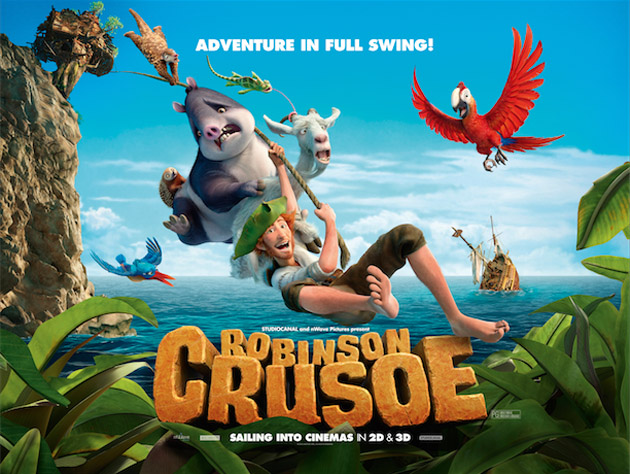 Robinson Crusoe has had an animation make-over to bring to life the classic age-old story.  This time, it’s the animals of the island that tell this tale, with the aid of vibrant and eye-popping 3D – the kids are going to love this.

This version of the shipwrecked Robinson Crusoe however, isn’t told from his viewpoint but those of the animals that inhabit the exotic little island, the one in which Crusoe is left shipwrecked and stranded on. When Crusoe is rescued by a bunch of Pirates it’s down to his parrot and companion, Tuesday, to recount the story to a couple of stowaway mouse. Tuesday is an enigmatic parrot, one who craves adventure and is convinced there is more to explore outside of the island he inhabits. When one morning Tuesday and his fellow island friends Carmello the Chameleon, Rosie the Tapir, Scrubby the Goat and a Kingfisher wake after a violent storm the find a strange being washed up on their beach, one in the form of Crusoe. Whilst his friends are wary and keep their distance of this human, Tuesday dives right in to explore. Crusoe’s animation form is nothing to write home about in fact he is fairly basic in his gangly form. It’s obvious that the emphasis is well and truly on the 3D effects that pop out of the screen. Children, as well as adults, will find themselves flinching as the action pops out of the screen.

Not before long Crusoe and the animals become firm allies as they both realise neither are of any threat to the other and whilst Crusoe can make their life a more luxurious and pleasurable one they could also be the key to his very survival on the island until he is rescued. With their help he builds himself a tree house with working water runways and all live in harmony together until two evil cats, who survived alongside Crusoe after the storm, take it upon themselves to create havoc. The appearance of these cats takes on those of scraggy hyena looking for their next prey. Don’t expect the cute cats of YouTube here; these cats were created to convey evil. Crusoe and his animal buddies Coming from a Belgian animation studio with a budget that no way matches those of the likes of the big dogs such as Dreamworks, they’ve taken the 3D format and well and truly embraced it. It has to be one of the best 3D Animations to date. Not only that they have made it work with its highly exciting storyline coupled together with humour to leave the big boys looking on in awe.

Robinson Crusoe is out in Cinemas May 6.