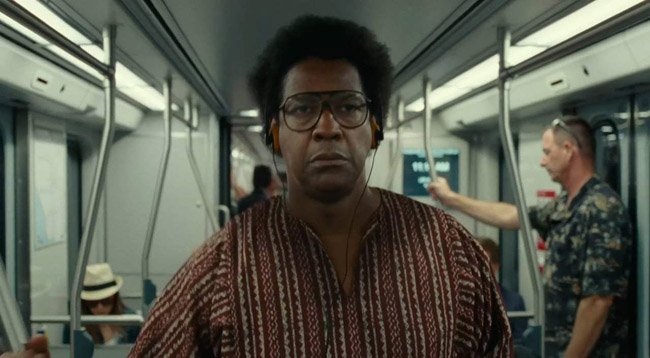 It’s hard to fathom Dan Gilroy’s awkwardly titled Roman J Israel Esq. is only his second stint as director, his first coming from the intense drama stylings of Nightcrawler starring Jake Gyllenhaal. The writer/director has kept to the intellectual script that’s doused in a characterisation study, bringing in another A-list name in Denzel Washington and extracting, as he did with Gyllenhaal, a career best with a character that deposits him firmly outside of his own comfort zone.

Israel (Denzel Washington) is small back-office, highly intelligent Lawyer with a photographic memory, full or morals who stick by the law letter by letter. But when his partner in the law firm suffers a tragedy, Israel finds himself without a job and in dire straits. Stepping out of his comfort zone and into the real world, he finds himself having to engage with people – not something he is used to accomplishing – to secure himself a job. Eventually, he gives in to the lure of a prominent corporate law firm at the persuasion of the polished George Pierce (Colin Farrell).

When his inarticulate approach to one of his clients gets him into trouble, Israel questions his own ethics. He conforms to fit in when he quite obviously stood out like a sore thumb. Inexperienced at covering his tracks, his transformation soon comes round to bite him in the backside.

It’s not hard to see why Denzel Washington has been nominated for an Oscar for his performance in Dan Gilroy’s Roman J Israel Esq…  It’s a role in which we barely see from him and one he loses himself in. It’s blurring the lines between actor and character that are barely visible to the eye. Washington’s rotund and eccentric Israel is a semi-autistic character. A former civil rights activist who, when he walks, it’s with a shuffling gait and a pair of headphones covering his ears. When talking to others his mouth engages before his brain with a childlike ignorance. Despite his tendency to live in the past, and the lack of his social skills, he has a generous heart and a moral compass that points to inevitably accomplishing the honourable thing.

This film is all about Washington, and rightly so. Farrell, on the other hand, seems to have been relegated to the sidelines of roles gone by. Playing a ruthless city slicker whose soft spot for Israel always shines through.

Gilroy’s narrative can seem a tad messy jumping from scene to scene with a loose and a script that is wordy to the point of exhaustion. Certain elements of the sub-story in Israel’s budding romance with a voluntary activist worker, played by Carmen Ejogo, don’t always ring quite true. The standards of Nightcrawler haven’t made it but it’s unfair to compare the two when the stories, although enriched with a moralistic point, are in completely different.

The collaboration between Gilroy and Washington has resulted in a richly subtle compelling character study which struggles to overcome its own meandering plot. An exhausting narrative made thoroughly enticing due to Washington’s unexpected and lovable portrayal of Israel.

Roman J Israel is out in cinemas February 2nd.