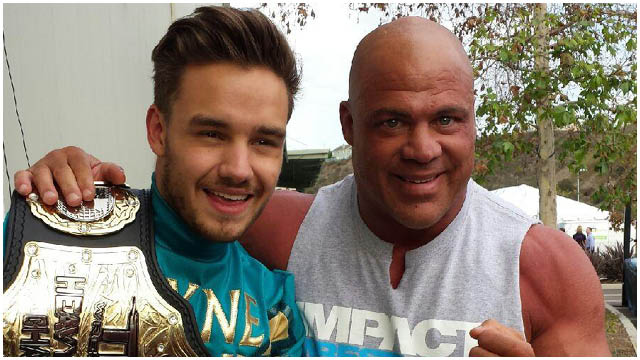 Kurt Angle has established worldwide recognition as a Professional Wrestler, actor and spokesperson since winning the Gold Medal in the 1996 Olympics.

Receiving numerous awards for his excellence in freestyle and professional wrestling, Kurt Angle is known as one of the world’s strongest competitors. With over 32 years of experience on the mat and in the ring, he is still considered to be one of the World’s Greatest Amateur and Professional Wrestlers of all time.

Kurt was in the capital this week to promote upcoming matches in Birmingham, Manchester, and London. He gave an exclusive interview to Flavourmag, and I was able to ask him a range of questions starting with his thought’s on the Ronda Rousey loss:

“She had a hell of a run. Ronda’s legacy will last an eternity. She is one of the biggest box office draws in UFC history and made female fighting popular in the main stream. Whether she continues to fight, or retires, she has made an everlasting impression on everyone”. Your match with Lashley at Wembley arena last January, where you regained the World Championship in TNA, was a classic. You looked very emotional after that win!

I was. I came back from a serious knee injury and being 42 years of age, I got emotional because at this point in my career I wanted to go toe-to-toe with someone like Bobby Lashley. That’s why I got emotional, because I validated that I am just as good now as I was ten years ago. I think you have to know when to step aside, but after that match I realised I still have a lot to give.

There are always a lot of rumours and your fans will be pleased to know you are in good health.

I’m great. I had a tumour in my neck removed earlier this year, and needed surgery to remove some fluid. It was a none malignant tumour that had been there for a long time, but it’s taken care of. I have matches coming up in the UK (TNA are touring the UK in January see: http://www.ticketmaster.co.uk/TNA-Wrestling-Maximum-Impact-tickets/artist/1008830 ) and I promise to give the best I can. If these are my final matches ever in TNA I want them to be remembered.

What does the 2016 Maximum Impact tour mean to you?

We draw our biggest crowds in the UK, and my last day (under contract with TNA) is on the 31st January, so we didn’t map it out but that’s how it has worked out, and if I could wrestle anywhere it would be right here in the UK.

What does the future hold?

Right now I’ve just signed a deal with the Bellator Mixed Martial Arts group (to do promotional work and commentary) and I have also signed with the APA Agency hopefully to do more TV and movies. I’m also on tour doing Q&A sessions which is a lot of fun. These are exciting times.

Kurt Angle is a great friend of Flavourmag and we look forward to his epic pro wrestling encounters in January.