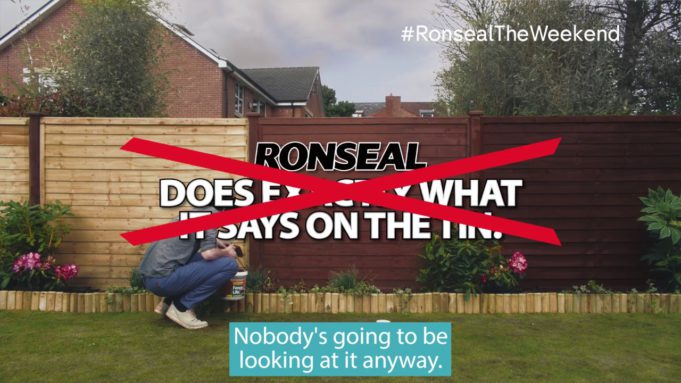 Ronseal and Channel 4 have been battling it out in an advertising campaign with a difference.

Remember that 2016 Ronseal advert which depicts a man painting a fence for a whole three minutes? Yes, that advert that blew every one’s mind, and almost made you think WTF?

Well they’ve done it again. Over the last few weeks, Ronseal, the DIY giant, have been going head to head with Channel 4 in a battle of epic proportions, (think Joshua vs Klitschko, lol) to persuade telly watchers and social media users to get off their sofas and tackle those household jobs that we just never seem to get round to.

This was a battle for people’s time, launched during smash hit TV show Gogglebox on the Friday before the May Day Bank Holiday. Viewers were left open mouthed as Alex Brooker (voice of Channel 4) urged Ronseal to ‘wind their neck in’! and a tub of Ronseal One Coat Fence Life literally went into battle with the Channel’s iconic blocks!

As the punches swung, Ronseal hit back with some cutting words of their own before security was called.

As millions of TV viewers watched the two brands jostle for viewers’ attention Ronseal and Channel 4 continued the spat on Twitter. Take a look at their tweets: And they popped up on Facebook when people were least expecting it:

Since then, Ronseal and Channel 4 have taken their banter across different types of programming. Viewers watching property, sport and entertainment shows and even films have been seeing the arguments continue.

We spoke to Ronseal and they said:

“We’re fuming! We were looking forward to getting the nation’s fences sorted this summer but for six weeks now Channel 4 has been telling people to spend their whole weekend watching telly instead. Imagine how great people could feel if they’d get up off that sofa, go out and get that DIY done.”