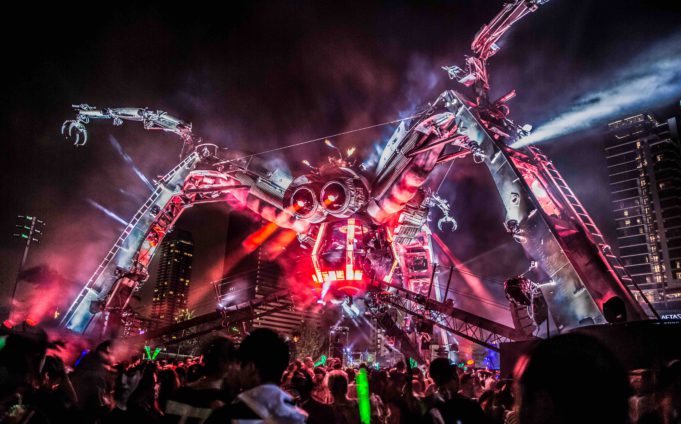 Arcadia is just announced that Rudimental, Sven Väth, Groove Armada, Noisia and more will be added to their already awesome lineup as they celebrate their 10th Anniversary in London at the 5th & 6th May 2018 at the Queen Elizabeth Olympic Park, London.

As the mighty Arcadia gear up to take London by storm this May Day Bank Holiday weekend, a second wave of artists has been announced across two 360 degree immersive worlds. Saturday 5th May sees Leftfield live joined by the ‘godfather of techno’ – the one and only Sven Väth. Saddling up the Spider for the very first time, his alchemical sound is primed to bring a whole new dimension to the biomechanical beast.

One of the biggest characters in dance music, Eats Everything, is back at the helm following his classic Arcadia sets from Glastonbury to Miami. Mixing up anthems, underground gems and cutting edge grooves with a mischief laced grin, his irrepressible energy flows through the entire dancefloor.

Iconic duo Groove Armada have been at the top of their game for 20 years and laid down some of Arcadia’s most memorable party sets at Glastonbury. Warm, rolling and utterly captivating, they’re back to work their magic for the biggest Arcadia event yet. Sunday 6th of May detonates a day of seismic bass from across the spectrum. Chart-topping Londoners Rudimental are masters of the euphoric, uplifting dancefloor, with a string of crossover hits and wide-ranging critical acclaim under their belts. Having rocked the Spider in Seoul, South Korea during Arcadia’s world tour – the mission ever since has been to do it on home soil. Mission accomplished.

Joining them is the musical particle accelerator that is Noisia. Dark, gleaming and turbulent, their laser-guided soundscapes thunder with overwhelming intensity and a taut, volatile energy. Noisia and Arcadia colliding in the middle of London? Brace yourselves.