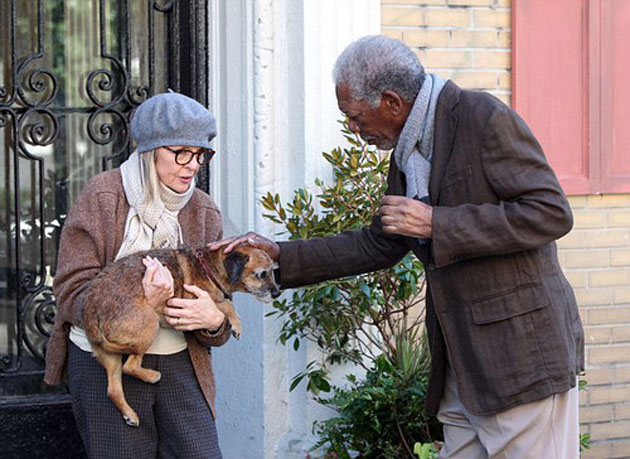 With a couple of major stars such as Morgan Freeman and Diane Keaton taking the helm and marketed as a coming of age film, you would have high hopes for a decent film.

Ruth (Diane Keaton) and Alex (Morgan Freeman) have lived in the same apartment since they married 40 years ago, but since then both have grown old and weary and have trouble managing the stairs they once leaped up. Agreeing it’s time to sell up and move on they enlist the help her Ruth’s pushy real-estate niece, Lily (Cynthia Nixon) to help them sell their apartment.

The black humour starts to arrive and wakes up the film as the couple open up their apartment to a stream of potential buyers, some just wanting to be nosey who have no interest in buying the property, while some are serious buyers such as a lesbian couple and a couple who have more money than morals.

With a number of potential buyers interested in buying the apartment, Ruth and Alex decide to get out Lily and take a look around a few open homes themselves for their own potential home, whilst this is going on their beloved dog Dorothy has to be taken to the vet and undergo a touch or go operation causing even more stress to this carefree couple.

With everything becoming just a little too much for the couple to deal with they seem to make the same decision, like any couple who have been together for so long and they end up making a few people unhappy but that really isn’t their problem.

We do seem to be given a message which to me and you today would mean nothing but when the film takes on the flashbacks of when the couple were young and just married, bi-racial marriages weren’t so accepted and even illegal in some parts of the states. Thankfully, times have now changed enormously. However, this part of the storyline doesn’t quite flow together as much as the chemistry Keaton and Freeman.

Unfortunately this cutesy and fluffy take on a coming of age story is missing that pizzazz that would keep you awake, it’s only pulling power is its main stars whose performance portrays they are made for each other as they gel so well, but the script is just weak and feels just a little too diluted.