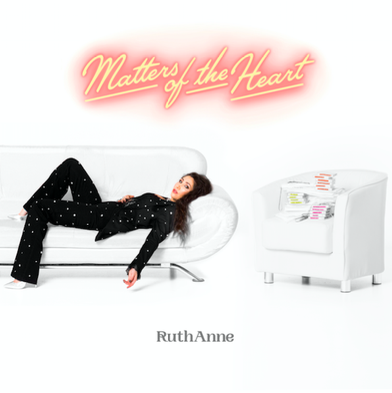 RuthAnne releases her debut album ‘Matters Of The Heart‘

From the age of 17, RuthAnne has been a big name within the songwriting scene, writing music for the likes of JoJo (Too Little Too Late), Britney Spears (RIAA platinum-certified ‘Work Bitch’),  One Direction (Where Do Broken Hearts Go) and Niall Horan (Nice to Meet Ya).

I chatted to RuthAnne backstage at her London show at Colours Hoxton (previously Hoxton Square Bar & Kitchen) about her debut album ‘Matters Of The Heart’ and what it’s like working with a household name in Pop, Niall Horan.

You’ve just released your debut album ‘Matters Of The Heart’. How does it feel to finally have a full body of work out there?

R- It has taken years to get to this moment. It took me three years to write this album, but it’s been a whole journey to actually get to this point where I’m actually releasing an album. I’m so happy and excited that I’ve finally got something out there to share with everyone

You’re a big deal in the songwriting scene, was your process different considering this time you were writing for yourself?

R-Yes for sure! I think when I’m songwriting for someone else my role is kinda to be the therapist in the room and pull the stories out of the artist. As a songwriter, the track has to be in the top 40 songs to be a hit so for that I have a different mindset for it but for my own album it was very much being my own therapist and sitting by myself and trying to find the most honest thing I can say and talk about my experiences so I definitely play two different people but ultimately I try and write the best song I can whether is for someone else or myself.

Describe your album in three words?

What track represents your life the most?

R- I’d probably say ‘The Vow’ by me actually represents my life the most. I wrote the song before I had 100% felt that unconditional love, I guess I had felt it for certain people but now I’m in a relationship I feel like my music has been embraced so well and it connects with me deeper than it ever has.

You co-wrote Niall Horan’s latest track ‘Nice To Meet Ya’. What was it like working with him again?

R- It’s amazing to work with him! We’re both Irish so we just get along so well. We chat more than we write if I’m honest. The songs will literally just happen and we’re like “How did that happen?” but it’s literally because we chat so much! It was amazing and with the second album, he wanted to push it to the next level and I think we 100% hit the nail on the head where he needed to progress too. Nobody wants to do the same song multiple times, I was so happy that they choose that as the first single because I got less time with him on this album because I’ve been touring and he’s in LA so we got two days to write together. We did two songs and ‘Nice To Meet Ya’ was one of them.

One person, you’d love to support or write for?

R- I’m already writing for my second album! We’re going to re-release some tracks with some amazing people featuring that I can say much about yet but I’m really excited for what’s to come