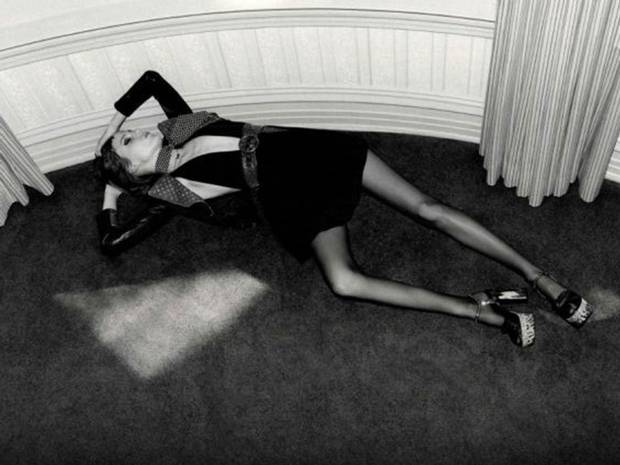 The image, photographed by the brand’s creative director Hedi Slimane, was subject to a magazine reader’s complaint and then deemed as “irresponsible” by the organisation.

The ASA released a statement via the BBC which noted that the model’s rib cage was exposed and her thighs and knees appeared to be a similar width. “We therefore considered that the model appeared unhealthily underweight in the image and concluded that the ad was irresponsible,”

What do you think about this ruling? Do you concur and believe the ad to be irresponsible? Leave your comments below.

But before you start commenting, take a look at some other adverts that have also recently been banned by the ASA.

Tom Ford’s ‘Black Orchid’ campaign featuring Cara Delevingne was also banned for being too sexy to be placed 100 meters (328 feet) from a school after receiving complaints from the community. “Whilst they [Tom Ford] accepted the model was nude…they believe neither her pose nor facial expression were sexually suggestive and were classical in nature, and had been depicted in art,” ruled the official ASA statement via Harper’s Bazaar UK

And fashion brand Miu Miu was also in hot water for this advert below starring actress Mia Goth was seen as being “sexually suggestive.” The ASA (via the Guardian) released a statement saying that the bed and young appearance of the model made it inappropriate.

“We considered that the crumpled sheets and her partially opened mouth also enhanced the impression that her pose was sexually suggestive,” says the organisation.

Keep in mind that this was only based off of one complaint, the same as the Saint Laurent advert above. One complaint is all its takes to get an advert banned sometimes.

Do you think their should be a threshold number of complaints before action is taken? Again leave your comments below and let’s start a discussion.