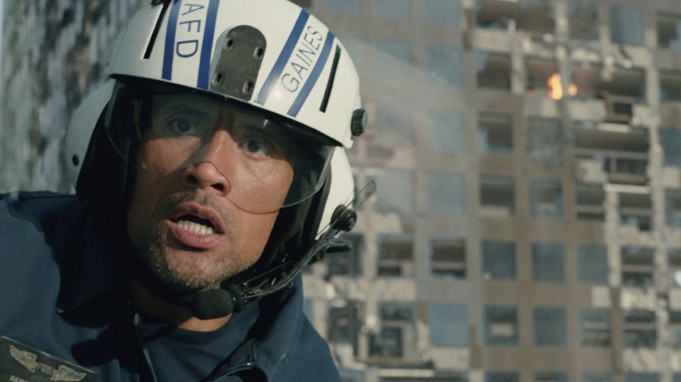 What happened to the days when disaster movies were award worthy, had a decent plot and had an emotional connection to its audience?

Nowadays, what we are given is nothing but amazing special effects and nothing but a hollow shell of a story, one we have seen before and has absolutely no heart. San Andreas is just another one of those films.

Ray (Dwayne Johnson) is a rescue pilot in the Los Angeles area, In the midst of a divorce with his wife Emma (Carla Gugino), Ray is going through a difficult time especially when learning that his wife and daughter, Blake (Alexandra Daddario) are moving in with his wife’s new boyfriend Daniel (Ioan Gruffud).

At the same time, earthquake expert, Lawrence (Paul Giamatti) and his assistant believe they have discovered a new way to predict an earthquake. They test out their theory on the Hoover Dam, When a massive earthquake hits, proving them right they get more than they bargained for when the dam breaks and discover an even bigger problem. When another massive quake strikes the area the whole city is left in turmoil with catastrophic outcomes.

As with many disaster movies in this time of technology, the special effects are pretty spectacular as buildings crumble, bridges break and floods take over the city leaving the city, its characters and the audience submerged under water. The effects are certainly the stand out star of the film. However, no matter how impressive these scenes are, it’s pretty constant throughout its whole two hours. It’s relentless and does become quite tedious to the point of losing concentrate and becoming easily distracted.

Along with the crumbling city, the story of Ray and his family are thrown into the mix to give it a personal feel. Ray has family problems but as with any disaster it brings his family back together. Ray reunites with his estranged wife in an attempt to save his daughter from her imminent death. Blake isn’t one to go down without a fight, though. What is nice is the fact the filmmakers have made her a strong independent young woman, one who doesn’t play the fragile frightened little woman waiting for the man to save her. Instead, she very much becomes the heroine and being the rock with the token romantic interest that’s been thrown in.

Unfortunately, the emotional/human side of this story is just weak and hollow. We’ve seen it so many times from films of this genre and it’s a problem that really needs to be fixed. We all enjoy the entertainment of a city under threat from natural disasters, but the special effects alone fail to carry the attention of the audience to its all too predictable end.

San Andreas is out NOW to own on DVD and Blu-ray.