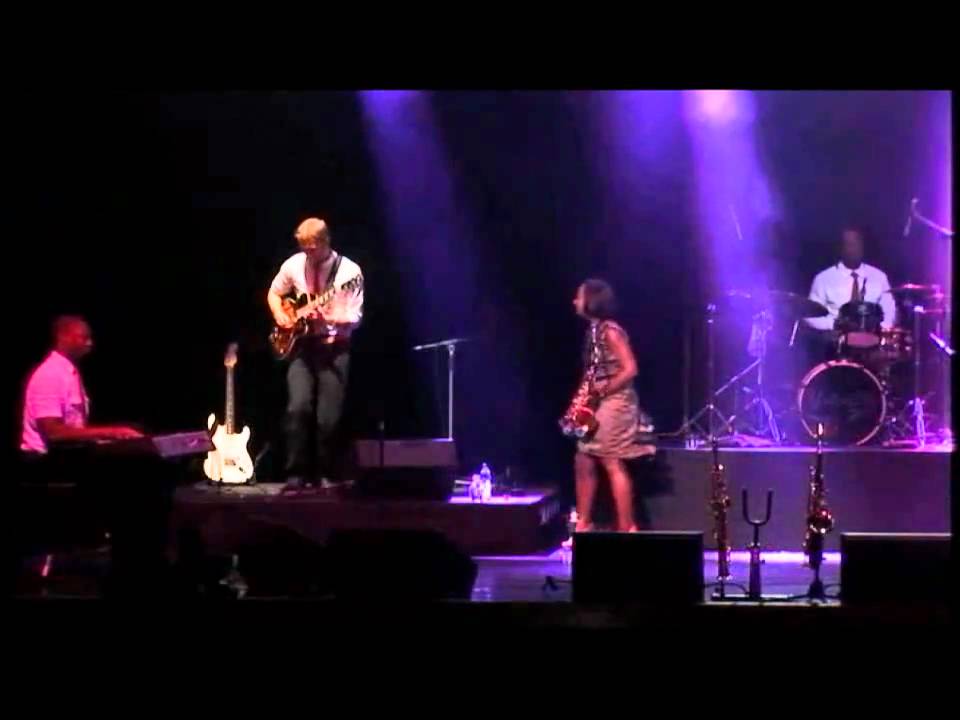 Meet Yolanda Brown a talented, intelligent woman who as a self taught saxophone player is now one of the UK’s best. She has had many great achievements including two MOBO Awards for ‘best jazz’, being invited to Buckingham Palace to meet the Queen, playing for the Russian president and the Jamaican Prime Minister, being listed in the Evening Standard as one of the top 30 black students in the UK and being awarded an Honorary Doctorate of Arts by the University of East London. Now she has released her debut album independently ‘April Showers, May Flowers,’ and for the first time shows off her vocal skills on it . You taught yourself how to play the saxophone at the age of 13. Why did you make this decision instead of having lessons?

I had played a range of instruments before the saxophone and so had a background of theory and reading music. The saxophone was the first instrument that I felt I wanted to make music on instead of playing what others had composed. Teaching myself the instrument and how to improvise came naturally and I enjoyed exploring for myself.

You have played many other musical instruments before the Saxophone. Do you still play anything else now, and what else would you like to take up?

I grew up playing the piano, drums and violin before the saxophone. I still play the piano now and have always wanted to play the guitar. I was given one for Christmas last year and I am enjoying finding chords and melodies.

Why did you decide to complete two masters degree in operations management even though you wanted to pursue a career in music?

I didn’t know that I would have a career in music until I was 2 years into studying my PhD in Management Science. I had already completed a Masters in Management Science and a Masters in Methods of Social Research and was well into my PhD research when I joined a band for the summer holidays (as some students do!) and by the end of the summer I was performing solo at shows and recording my own music. Solo concerts and the MOBO awards followed and I was still studying, it was only then that I realised that a music career was budding.

You’ve performed in front of Russia’s president and Jamaica’s Prime Minister.  Which one was more nerve racking, and which president or Prime Minister would you like to play for now?

For me, music and performance is like conversation and so I don’t find being on stage or playing my saxophone nerve racking. Both of these occasions were memorable because of the people and where I played, the Hermitage in Russia was beautiful and being accompanied by Russian Folk instruments was great. In Jamaica, Port Antonio by the sea! It is a true honor to be able to play for such dignitaries and I would love to add Barak Obama to that list!

You have also met the Queen and Duke of Edinburgh. What was meeting them like, and what did you talk about?

To be invited to a reception at Buckingham Palace on the merit of the work that I love to do was overwhelming. It was a true pleasure to meet the Queen and Duke of Edinburgh, as well as their staff and associates and be able to talk about my music, journey and future plans.

You’ve had some great achievements one of them being listed in the Evening Standard as one of the top 30 black students in the UK by Gordon Brown. How did you feel?

It always amazes me that you can be recognized for something that you are doing naturally in your everyday walk of life! As I said, I love to research and so was doing what I was passionate about and then found that this was something to be celebrated! It is strange because there is so much more that I plan and want to do. I’m not there yet, but it is reassuring and motivating to have these achievements and be recognised along the way… it gives me a push to do more and better!

What is your personal biggest achievement to date?

My personal biggest career achievement so far would be independently releasing my debut album. I have been humbled and excited by the tours and awards but being able to release my music and be accessible to people that want to hear my music is something I am very proud of.

You have always been an independent artist with many record labels approaching you. When do you think the time will be right for you to sign a deal?

When the deal is right! As an independent artist you have to work very hard to make an impact but you also have control of your brand and how it is looked after, the balance if very important to me.

How do you feel you have taken and developed jazz music to a new and exciting level?

I don’t think that I can take credit for developing jazz music, although I do enjoy doing things a bit different. As I have been touring, holding workshops and meeting people who enjoy my music I think the main thing is about feeling what you play -being able to improvise and make the listener feel something. Also, having grown up with such a range of musical genres being played at home, I like to mix these influences into my music. Hearing Jazz alongside Reggae, Classical, Gospel, Soul, Hip Hop, etc makes it music that all can tap into and enjoy.


What is your debut album ‘April Showers, May Flowers,’ about, what is the story behind it?

April Showers May Flowers is a story of overcoming the odds. The April Showers illustrate the trials that we all have to overcome in life, hard times that take that extra push to get through. When we get through, the May Flowers come; The silver lining, blessings, good times that we can celebrate. This is something that young and old can identify with.

How has your sound developed since your two EP’s?

I think the main development is maturity. When creating original songs on my EPs they were based in improvisation in the studio – the band would play and I would improvise the saxophone lines while recording. With my debut album there was a longer writing process involved where the songs could breathe a little and notes or sections could be changed to make the finished song. This was a new experience for me and a great process to experience, as well with using the spontaneous element of recording also.

You sing and play the piano on your new album. Why the decision to have two vocal tracks and how do you feel letting people hear your singing voice?

When writing melodies and improvising I use words in order to get the emotion across. Usually these words are in my head as I play, but when writing the album I had written them down. It got to a point where I had lyrics written for saxophone melodies and so I decided to vocalise them for this project to get the point across quicker. It was my first time singing and developing my voice as an instrument with vocal coaches. It is new and exciting and I look forward to growing with it even more in the future!

The Royal Philharmonic Concert Orchestra accompanied me for the first two dates of my album tour to launch my debut album. They were two fantastic concerts at the HMV Hammersmith Apollo along with my full band and backing vocals. On the Album, April Showers May Flowers, I have strings and orchestral arrangements and so it seemed only right that the first time this new music was to be played live in concert it would be with an orchestra! The RPCO were wonderful and it was an overwhelming experience to hear and play my music alongside a 25-piece orchestra. It was also a great buzz to have them play the range of genres I love, including Reggae on TokYo Sunset!

You say you plan to do this with similar orchestras right across the world. Where would you tour next and why?

There are Philharmonic Orchestras all over the world and I would love to take this concert all around the globe. My next stops would be Japan, Australia and USA – I love their appreciation for new music and can’t wait to share my music with different cultures and people.

YolanDa Brown’s debut album April Showers, May Flowers is out now on Black Grape Records. For info on her UK tour visit www.YolandaBrown.co.uk