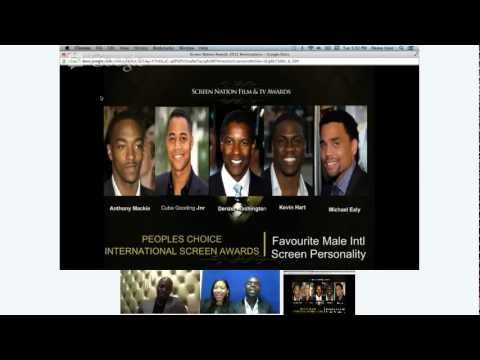 2012 marks the eighth Screen Nation Film and Television Awards and Europe’s only international celebration of black achievement in film and television, is proud to honour industry achievements during the 50th  Independence anniversaries of Jamaica and Trinidad & Tobago. Get a look at the nominations that were revealed on Google+ Hangout on Air, below.

Charles Thompson MBE, CEO of Screen Nation says: “I am so proud to be able to showcase in this our 8th year, the extraordinary pool of black British talent that resides here in the UK. Their work is being seen all around the world and they are exemplary role models for the community. Screen Nation celebrates the achievements of all the winners and nominees and joins with the industry in wishing them all the very best of luck.”

The star-studded ceremony will be hosted for the first time by actor Wil Johnson of ‘Waking the Dead’ and Radio 1Xtra chart host  Sarah Jane Crawford.

HONORARY AND MAJOR AWARDS
Classic Movie Award – ‘The Harder They Come’, now in it’s 40th anniversary year.
Vanguard in Film Production –  Paul Bucknor, co-producer of British classic ‘The Full Monty’.
Special Achievement Award – Femi Oguns for his groundbreaking contribution in nurturing some of the very best new British acting talent through his Identity Drama School.
Outstanding Contribution to Film and TV – Louis Gossett Jnr.  for a career that has spanned over 40 years. He has starred in television series ‘Roots’ and won an Academy Award for his powerful role in ‘An Officer and a Gentleman’
Edric Connor Inspiration Award – Joseph Marcell for decades of acting excellence and especially for his much-loved role as Geoffrey the butler in classic sitcom ‘The Fresh Prince of Bel-Air’.
International Icon Award – Richard Roundtree  who is arguably the originator of film ‘cool’ as a result of his iconic lead character portrayal in the 70’s classic ‘Shaft’.

The UK Screencraft Achievement Awards section includes categories Diversity in Factual Production. Nominees include BBC3’s ‘Is Football Racist?’, ITV1’s ‘The Mighty Mississippi with Trevor McDonald’ and BBC4’s ‘The Race that Shocked the World’.

Independent black British cinema and television programming is recognised through the Independent Spirit Film Production and BME Channel Programming categories. The public will vote to decide who wins the Favorite Urban Movie which sees nominees ‘Demons Never Die’, ‘Fast Girls’, ‘The Man Inside’ and ‘Payback Season’ go up against each other.

The popular Peoples’ Choice International Screen Awards sees a host of wonderful Caribbean themed films nominated for the first ever Best Caribbean Film. Hoping for the public vote in Favorite International Film (US), Favorite Female Screen Personality (US)  and Favorite Male Screen Personality (US) categories are a host of African American Hollywood movies and screen stars of the calibre of ‘Red Tails’, ‘The Help’ and ‘Think Like a Man’ as well as Academy Award winners and nominees Octavia Spencer, Taraji P. Henson, Viola Davis, Cuba Gooding Jnr. and Denzel Washington.

Rounding off this section are the Female Performance in Television and the Male Performance in Television categories, which include nominees such as Karen Bryson –‘Shameless’, Nina Sosanya –‘Silk’ and Ruth Negga – ‘Shirley’ with the men represented by top talents Lennie James – ‘Line of Duty’, Ashley Walters –‘Top Boy’, David Harewood – ‘Homeland’ and Patterson Joseph in ‘Julius Caesar’.

Public voting ends Tuesday, November 6. To vote, visit www.screennation.com and you could win a VIP ticket that includes full access to the reception, banquet, ceremony and after party plus a VIP goody bag.