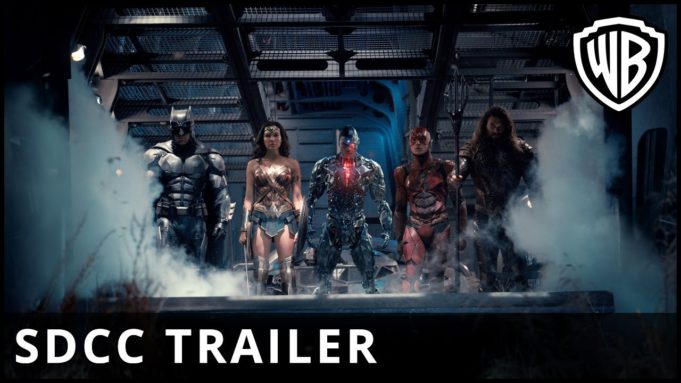 The Hottest New Trailers. As always, Comic-Con delivered a wealth of movie news and exclusive content and brand new trailers.

Read on for a 4 minute look at Justice League, a teaser of Steven Spielberg’s Ready Player One and a feline surprise in The LEGO NINJAGO Movie…?

Fueled by his restored faith in humanity and inspired by Superman’s selfless act, Bruce Wayne enlists the help of his newfound ally, Diana Prince, to face an even greater enemy. Together, Batman and Wonder Woman work quickly to find and recruit a team of metahumans to stand against this newly awakened threat. But despite the formation of this unprecedented league of heroes—Batman, Wonder Woman, Aquaman, Cyborg and The Flash—it may already be too late to save the planet from an assault of catastrophic proportions.

Feast your eyes on the exclusive SDCC teaser for Ready Player One, directed by Steven Spielberg. In cinemas March 2018.

From filmmaker Steven Spielberg comes the science fiction action adventure “Ready Player One,” based on Ernest Cline’s bestseller of the same name, which has become a worldwide phenomenon.

The film is set in 2045, with the world on the brink of chaos and collapse. But the people have found salvation in the OASIS, an expansive virtual reality universe created by the brilliant and eccentric James Halliday (Mark Rylance). When Halliday dies, he leaves his immense fortune to the first person to find a digital Easter egg he has hidden somewhere in the OASIS, sparking a contest that grips the entire world. When an unlikely young hero named Wade Watts (Tye Sheridan) decides to join the contest, he is hurled into a breakneck, reality-bending treasure hunt through a fantastical universe of mystery, discovery and danger.

Ready for an epic tale of good and Dad? Watch the new trailer for The The LEGO NINJAGO Movie, in cinemas October 13!

In this big-screen Ninjago adventure, the battle for Ninjago City calls to action young Lloyd, aka the Green Ninja, along with his friends, who are all secret warriors and LEGO Master Builders. Led by kung fu master Wu, as wise-cracking as he is wise, they must defeat evil warlord Garmadon, the Worst Guy Ever, who also happens to be Lloyd’s dad. Pitting mech against mech and father against son, the epic showdown will test this fierce but undisciplined team of modern-day ninjas who must learn to check their egos and pull together to unleash their true power.