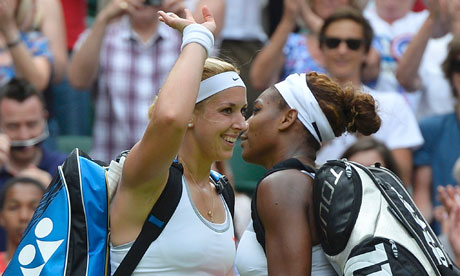 What happened on Monday to Serena Williams was nothing short of unbelievable. Five times champion and on a winning streak of 34 matches, Serena was an sure favourite to win the title for a sixth time, even more so after the early exits of Maria Sharapova and Victoria Azarenka. But having led 3-0 and 4-2 in the final set, she slipped out of the Championships, beaten 6-2, 1-6, 6-4 by Germany’s Sabine Lisicki.

We are big fans of Serena and even though she might be out of Wimbledon we couldn’t miss a chance of having a peak at some of her more outlandish fashion choices. Baby got back! Surly this buttock display is straight intimidation for Serena’s opponent She got the boxing boots on, the denim hoochie skirt and over sized earrings that look like they bout to come off! Maybe Serena is playing against TLC in this hot pink, 90s hip hop inspired number, can’t imagine the smell after playing in this one! We have to end with a special mention to sister and fellow fashionista Venus Williams who may not have topped her sister on the court but in fashion faux pars she is the champ with the Moulin Rogue lacy number teamed with “take a double look” flesh coloured pants.