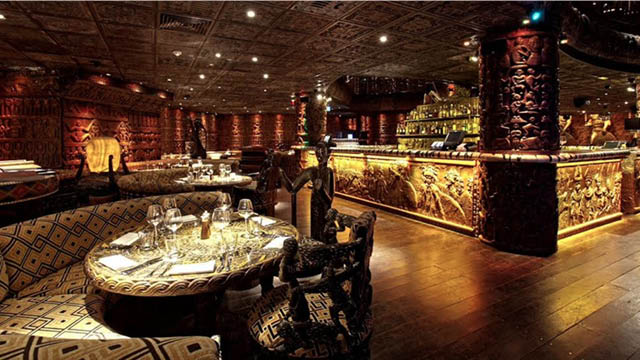 Shaka Zulu is a restaurant, bar and club situated in the heart of Camden serving exotic South African food. Walking through the doors I was hit by the feeling of wow! I mean picture the setting beautiful ornate carvings on every surface with rich mahogany wood and statues of Zulu warriors and animals, a vast yet intimate space with what can only be described as moody romantic lighting, luminescent bars on either side of the room casting a lovely lush glow and a variety of seating from cosy enclosed booths, sofa’s and tables. So yeah, first impressions this place has style that’s without doubt, but does it have substance? Well read on to find out. Me and my date were greeted by very friendly staff who took my to my table overlooking the vast Zulu statues. Now to be quite honest my knowledge of African food is sketchy at best. I have sampled Kenyan food, but never South African and never any game meats. So I was up for the full experience, but slightly nervous as to what to expect. I asked the waiter for his recommendation for the starters he told me the Crocodile Cigars which consisted of lightly marinated fillet with onion and coriander, wrapped in pastry with barissma mayonnaise and my date was suggested the Wild boar with with Ostrich terrine which consisted of poached pork knuckle, a fillet of Ostrich served with sweet papaya and a cibatta wafer. On a minutes reflection of the lengthy cocktail menu we decided to go for the Madiba and the Oro Dragon the former being Santa Teresa Claro based and the later being the award winning Barcadi Gold rum based cocktail.

We were served our cocktails promptly and subsequently had our first sips, the experience can only be described as an awesome party of flavour. The Oro dragon had a lovely cinnamon base flavour subtle and delicate the Madiba was an explosion of sharp tropical flavours and was my personal favourite. At this point me and my date noted we would come here for the drinks and ambiance alone.

Our starters arrived after a short wait. The Crocodile Cigars were a joy the pastry was crispy, buttery and light. In terms of the meat I don’t have the most accurate frame of reference of how to describe it, but I would have to say it was similar in taste to chicken with a somewhat more prawn like texture this coupled with the zingy curry like flavour reminiscent of a samosa made a fabulous combination especially when factoring in the delicious mayonnaise. The Ostrich was incredibly lean dark meat reminiscent of beef or possibly veal I would definitely sample it again, but I have to say without exception the Wild Boar was the favourite of both me and my date as it was packed full of rich divine intense flavour it seemed more tender than traditional pork and in my opinion superior in overall taste and texture. The crisp cibatta was slightly over dry.

With the starters finished and our appetite wetted and me and my date suitably impressed we decided on our mains. We wanted to sample the wide range of game meats available, so choosing from the game meats mains we decided on the Springbok Loins served with red wine Jus, straw potatoes and confit cherry tomato. We selected further cocktails of Apple Crumble and Prosecutor’s passion.

Our Drinks arrived in a flash. The Apple crumble Zubrowka Vodka combining effortlessly with a home-made apple crumble flavour, yum yum. The Prosecutor’s passion Bombay Sapphire gin with elderflower and passion fruit was the pick of the bunch in that it had that exotically indescribable taste that makes you not want to put the straw down.

After another brief wait the mains arrived. The Pork Loins both of which were served perfectly medium rare can be described as the most tender and elegantly flavoured meat combined with the rich red win Jus was simply an orgasmic pallet of food. The straw potato was crisp and added a lovely counter weight in terms of texture to the plate. The Peri Peri chips I had ordered were heavily spiced which personally agreed with me and the Butternut squash was warm and creamy though a tad oily. Key not In terms of the quantity of food I would suggest coming to this place with a healthy appetite as portion sizes are fairly large.

After sometime to digest are food and contemplate on just how good our food had been we were ready to order our deserts. I opted for the Strawberry Cheesecake and my date went for the Dark Chocolate Tart. The cream of the cheese cake was light and bouncy with a refreshing potently sweet, but not sickly strawberry flavour. The Dark Chocolate Tart was as rich and decadent as its appearance suggested and was constructed in a beautiful way with coloured sugar glass. Plates polished me and may date ordered some more drinks and we further drank in the experiences of our meal and the atmosphere of the setting.