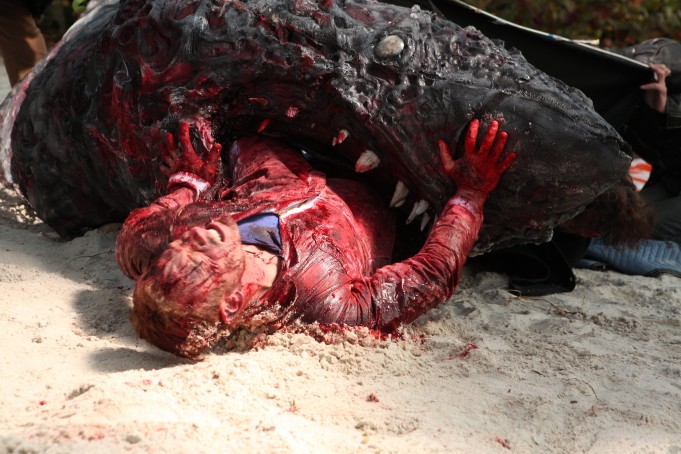 There is no wonder that this franchise of shark-infested tornados is such a cult hit with audiences worldwide. It’s so bad, it’s good. Like a car crash you just can’t help to watch the fall out of. Sharknado 3 Oh Hell No just proves why this franchise will keep growing strong.

We enter this world of madness in good old Bond fashion with a silhouette of Fin Shepherd walking into the centre of the picture of an open mouth of a shark. The silliness doesn’t stop there.  The opening scene sees’s Fin Shepherd (Ian Ziering) running (again Bond style) through Washington DC automatically making you think he is running from another deadly storm, In fact, he is late for an award ceremony at the White House, where the president of the USA is about to honour him. This is where our first cameo pops up in the form of NeYo as Agent Devereaux of the CIA.

The calm doesn’t last too long as no sooner than you blink a Sharknado hits Washington DC destroying the White House but not before Fin gets his chance to save the President who ends up turning into some kind of Rambo himself, wielding a machine gun and blasting out any shark that comes his way. From this point onwards you, you won’t be able to stop laughing at the over the top heroics of our hero. Once this little episode is over, Fin tries to make it back across the East Coast to reunite with his pregnant wife April (Tara Reid) and the rest of his family who are having a day out at a Theme Park in Orlando; of course this isn’t all plain sailing. It’s not long before Fin encounters his first hurdle and runs into Nova (Cassie Scerbo). The two team up to fight off the sharks as they make their way to Orlando. The filmmakers certainly take the joke to the next level as the two fly a supersonic plane across the shark-filled skies, but it all comes to much as they have to escape the plane and land exactly where they need to be. In the theme park, but hold on a minute, they land in a pond and emerge half naked in that sexy slow motion move we’ve seen so many times before.

The problem is the Sharknados are getting worse and once they merge cover a 100-mile radius across the East Coast. With the threat of total destruction, Fin recruits his father, Colonel Gilbert Shepherd (David Hasselhoff) for a trip into space to fire a laser into the heart of the storm in order to stop it. Obviously, they save the day with a couple of sacrifices which include leaving Gilbert in space but the outrageous part comes when we get ‘Sharks in Space’ swallowing both April and Fin whole and April giving birth while inside the Shark and her skin tight shorts seem to stay on. If you strip away all the ham acting we get to what isn’t a bad storyline, it’s just wildly creative. Even if the script and special effects ooze low budget if it wasn’t for these the film wouldn’t be as entertaining as it. Sharknado 3 Oh Hell No is hilarious, full of gore and so wildly entertaining it won’t fail to put a smile on your face.

Sharknado 3: Oh Hell No is out now on Digital Download and the 23rd of November on DVD.