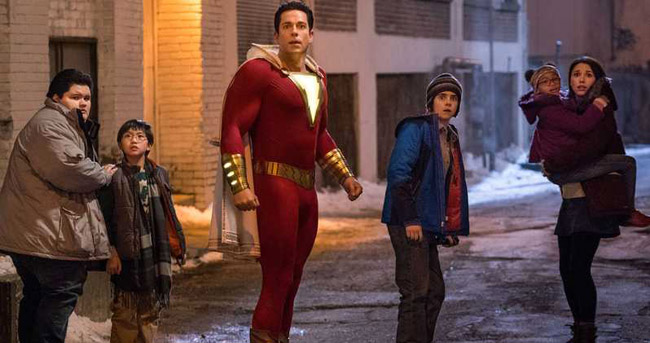 A popcorn frenzy, it has bundles of fun, entertainment and charm, it’s a welcome way forward if you are suffering from Superhero fatigue.

Warner Bros. DCEU has taken a battering over the last few years, never quite living up to the hype of Christopher Nolan’s Dark Knight trilogy, it’s struggled to hit the right cord that goes head to head with Marvel’s runaway success.  David F. Sandberg has finally boarded the powerless engine and added a much-needed thunderbolt to its arsenal in what is essentially a kid’s movie the whole family can enjoy with a large cartoon of popcorn.

Sandberg has laid out a coherent foundation and given a well thought out direction from the very outset. The opening sequence introduces a young Doctor Sivana, considered the runt of the family by his own Father and Brother. Summoned by a wizard, he is tested as to whether he is worthy of the Wizards powers only to be tempted by greed and rejected.

Flash forward to the present day we are introduced to Billy Batson (Asher Angel), a kid who is sauntered around between foster families even though he has a big heart but is a bit of a handful. He refuses to make any attachments to his latest family of fosters until the same wizard that rejected Sivana has no choice but to pass on his powers to Batson and he becomes a grown ass man as he turns into Shazam (Zachary Levi).

The fun and games ensue when Billy aka Shazam turns to Freddy (Jack Dylan Grazer), his superhero fan foster brother for a few tips on how to handle his new find powers. The gags, whilst aimed at the younger audiences, come swift and slick as Shazam fights off a pair of criminals from robbing a store to totalling the school bullies pick-up truck. There is something quite pure and natural to the excitement of the boys getting to know exactly what Shazam’s powers are.

The plot isn’t exactly something we haven’t seen before; Billy lets his powers go to his head and becomes a little selfish in his actions, causing a rift between the boys. Whilst the adult Doctor Sivana (Mark Strong) has spent his whole life dedicated to finding a way to get back to the wizard in order to obtain his powers and through his own jealously goes into battle. It’s formulaic to the point of staying within the lines but it’s the whole action that happens outside of the face-off that provides pure entertainment.

Levy as Shazam is perfectly cast, he has the cheeky innocence of a child in a man’s body, whilst Strong if effortless as the villain to the point of thinking it’s just another easy day’s work for him. As for the foster kids, each one has that endearing quality that instantly connects the audience to the characters. Sandberg has also left a few little nuggets to haul in that old school feel with one scene fairly reminiscent of Tom Hanks Big. Oh and anyone familiar with Sandberg’s work on the horror Annabelle: Creation may just glimpse the doll popping up for a cameo.

It’s nothing new but Sandberg has delivered a popcorn frenzy of a film, bundles of fun, entertainment and charm it’s a welcome way forward if you are suffering from Superhero fatigue.