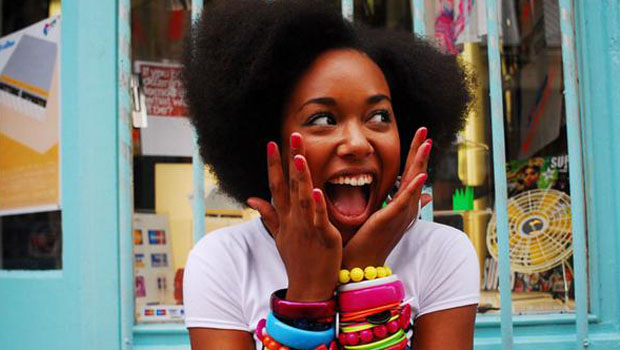 Shea Soul is a London based singer-songwriter best known for her collaboration with Attacca Pesante on ‘Make It Funky For Me’, the catchy funky summer tune released a few years ago. Shea brings together soul and jazz influences in her music and releases her single ‘Where Did You Go’ this year, alongside her album ‘Grey Skies & Rainbow Fingernails’. We caught up with Shea to talk about her new single, inspiring musicians and painting her nails the colours of the rainbow!

How long have you been singing for? I don’t remember a time when I didn’t sing. It’s always been in my life.

What was your upbringing like? Pretty regular I’d say. I was part of a big family and the house was always full whether it was through family or friends. None of us really had much, but I don’t remember feeling like we went without.

You went to the Brit School for a while, which is famous for creating talent, were you there with anyone who has now made it? No. I have to say the Brit School wasn’t a particularly special experience for me.

Which musicians inspire you? The singers I’m mainly inspired buy would have to be Ella Fitzgerald and Lauryn Hill. I love John Legend too, he’s a pretty cool musician. ongwriter is that where your heart lies? My heart lies in any kind of music that I can really feel. I wouldn’t restrict it to soul, but I would say that soul and jazz probably move me the most.

What is it about soul and jazz music that you love? I love a good vocal, and they tend to come alongside those kinds of music. I love jazzy chords that strike emotions and a soulful voice that can take you right to the place the singer is coming from.

What other kinds of music do you like? I love blues and a bit of folk when I’m in the mood, I also love 90s’ R n B, deep and Soulful House, Lovers Rock and classic Reggae, and pretty much anything with a good bassline.

Which artists are you listening to at the moment? I’m mostly listening to Fink, Gregory Porter and Jill Scott right now.

You collaborated with Attacca Pesante on ‘Make It Funky For Me’ how was that? It was great. We had a lot of fun with the track, and I had some amazing experiences performing it.

Would you consider doing anymore Funky tracks? Why not? If the right track came along that I wanted to do, I’d do it. I’m very open with music and I don’t like to restrict myself.

‘Where Did You Go’ is released this month, explain what that song is about? It’s about a dramatic change in a person that you thought you knew, lost to an unknown place that causes heartbreak and leaves you behind.

Do you think other people who were raised in single-parent families can relate to this song?
I have friends raised in single parent homes that most definitely do. I wanted the video to reflect this kind of situation as I thought it was a good way to describe the kind of emotions I was writing about.

Your Album ‘Grey Skies & Rainbow Fingernails’ is due for release in April this year, how did you come up with the name? Life is filled with grey skies, but you can always paint your own rainbow fingernails! (Which I do). I like to look on the bright side of things, but my album has music about both my grey skies and rainbows.

What can we expect from the album? Everything that is me. It’s a very personal album with vocals as a forefront and great music to compliment them generally and emotionally. If anyone loves it even a quarter as much as I do, then they’re in for a treat!

In the past you have worked with Shy FX and MJ Cole – who else will we see you working with? I’ve got a few collaborations lined up this year, but you’ll just have to wait and see!

What’s next for you? Getting my music out! I’ve got lots of new music on the way starting with my first solo single ‘Where Did You Go’, my album is due out in summer and I’ll be doing lots of gigs up and down the UK, as well as putting out more singles from the album. I can’t wait!

‘Where Did You Go’ is out February 24th 2013 (TwoPointNine) take a look at the video below!