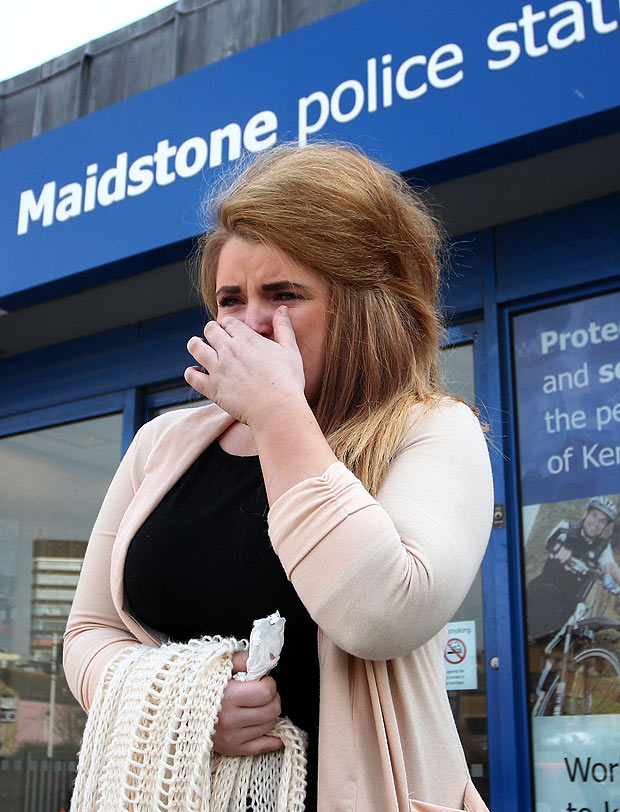 BRITAIN’S first-ever ‘youth policing tsar’ broke down in tears yesterday while apologising for her Tweets about sex, drugs and violence.

Seventeen-year-old Paris Brown — who is paid £15,000-a-year as Youth Police and Crime Commissioner in Kent — sobbed at a press conference at Maidstone Police Station.

BRITAIN’S first youth police commissioner broke down while being interviewed by the BBC on her questionable tweets.

In one, the teenager tweets about drugs, saying: “I really wanna make hash brownies.”

“f****** cut everyone” before blasting her local PIZZA DELIVERY company.

Brown ranted about her local pizza take away: “F****** hell why are the people from Direct Pizza so difficult to talk too!! IT IS CALLED ENGLISH. LEARN IT.”

One for the cast of reality show Made In Chelsea when she claimed everyone in it “looks like a f****** fag”.

And she seemed to know herself in this one, writing: “im either really fun, friendly and inclusive when im drunk or im an anti social, racist, sexist, embarrassing a****** often its the latter.”

Brown apologised in a statement after calls to resign from her taxpayer-funded post.

“I am not homophobic, racist or violent and am against the taking of drugs.

“If I’m guilty of anything it’s showing off and wildly exaggerating on Twitter and I am very ashamed of myself, but I can’t imagine that I’m the only teenager to have done this.”

She claims that her “Hash Brownies” comments were a reference to children’s cartoon series Scooby Doo.

After the tweets were made public, MP Keith Vaz led calls for Brown to step down.

Her boss Ann Barnes, Kent Police and Crime Commissioner, who said: “I suspect that many young people go through a phase during which they make silly, often offensive comments and show off on Facebook and Twitter.

“I think that if everyone’s future was determined by what they wrote on social networking sites between the ages of 14 and 16 we’d live in a very odd world.”

What do Flavour Readers think? Would you be sacked if your boss read your tweets?  Are these tweets the usual teenage banter or should a young woman representing the youth be held accountable for her twitter actions?

Will you be thinking twice before you tweet after this case?