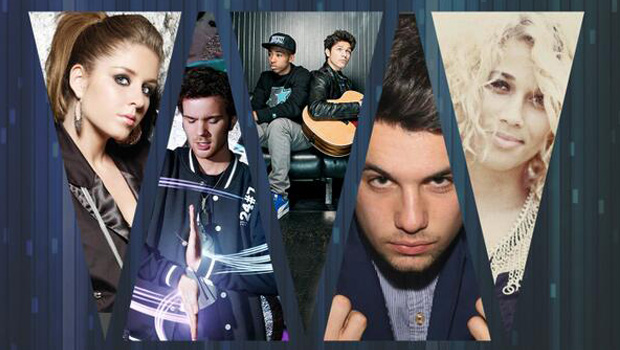 Showcase Live returns to Under The Bridge for its seventh anniversary show and its strongest lineup ever. Esmee Denters, Cameron Bloomfield, Chromatone, Tyler N Stevie and Ray Jones will all make their Showcase Live debuts on Monday 24thFebruary.

Showcase Live has been an integral starting point for some of pops biggest names in the UK, including Jessie J, Lawson, Leah McFall and JLS. It is the go to place for executives from the creative industries to witness a carefully selected handful of unsigned and just signed artists. Since the launch in 2007, previous artists have racked up an impressive 53 top 40 singles including 41 top 20’s, 37 top 10’s and 10 number ones, plus 13 top 10 albums, 11 MOBO Awards and 3 BRITs.

Tickets on sale from http://www.seetickets.com/tour/showcase-live Esmee Denters
Esmée Denters started her career by uploading videos to YouTube where she was soon discovered by American superstar Justin Timberlake. Justin went on to sign her as the first artist on his label Tennman Records. She released her debut album, Outta Here in 2009 which she co-wrote with executive producer Timberlake.

Now, after the spending countless months in the studio, she’s ready to perform her first show in over two years and we’re excited to be amongst the first to hear some new material!

Cameron Bloomfield
It’s not often that you hear a male vocal like Cameron Bloomfield and his Reload Sessions cover of Bruno Mars shows very clearly why we’re so excited. We even featured him in our Ones To Watch this year.

Cameron, just 18 years old, is a singer, songwriter and multi instrumentalist from Essex. His original track ‘Could Be Something’ has an incredible video to accompany it which has been getting a steady stream of interest on YouTube.

After establishing himself as a professional session-guitarist and singer, touring through Asia and Europe, studying Law at UCL and graduating with First Class Honours on the side, Phil decided to channel his undeniable talents as a singer, songwriter, guitarist AND dancer. He has filled London’s top venues, such as the Jazz Café, Scala, O2 Academy Islington and many more. His recent YouTube releases see him attracting over 330,000 views in just 2 months.

Tyler Reid and Stevie G met in high school where their love for the performing arts brought them together in drama club. At only 18, they are skyrocketing off the back of their YouTube channel. With talent beyond their years and musical diversity that’s appealing to a wide range of audiences, Tyler N Stevie are catching the attention of their global fans and industry alike — aptly dubbed the “Stylers.” With the duo’s forward-thinking, malleable multi-genre approach, reflecting their diverse love of music, nothing sounds quite like them.

Ray Jones
Ray Jones’ style is contemporary with nostalgia and retro influence that instils a timeless quality into her music. Think doo-wop with a 21st Century twist. Born to a Jamaican mother and an English father, she first began singing at an early age and but, unlike many of her peers, Ray has already graced some of the world’s biggest stages. Her vocal talents have been showcased at London’s most prestigious venues including; The Royal Albert Hall, The Union Chapel, and St Paul’s Cathedral.