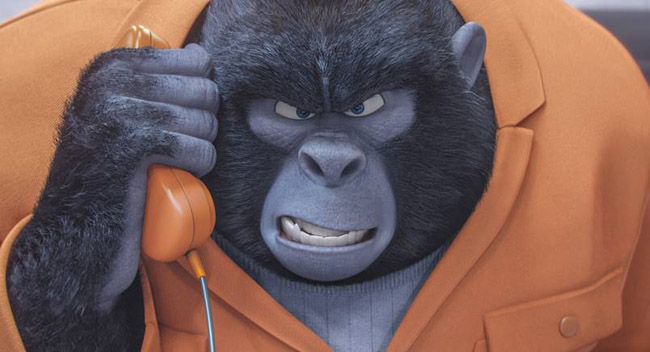 American animation film production company, Illumination Entertainment, made a name for itself back in 2010 with break-out film, Despicable Me.

Since then, it’s profited on the popularity of the sideline stars, the Minions, and produced a sequel, a spin-off, plus other adventures away from that universe, including this summer’s The Secret Life of Pets.

Their seventh film in six years comes off the back of yet another cultural phenomenon: the singing competition, and is aptly titled, Sing (a slight yet very similar deviation perhaps from Disney’s latest Brave/Tangled/Frozen title treatment). It follows the story of a small koala with big dreams for show business, who needs to think fast if he wants to save his theatre handed down from his late father.

Buster Moon, the aforementioned appropriately-named for his life on the stage koala bear, is voiced by Matthew ’alright, alright, alright’ McConaughey who leads a relatively high profile cast. Relative as it seems that maybe this cast are not exactly hot on the casting sheets right now as they once were e.g. Reese Witherspoon and John C. Reilly who play a pig housewife and sheep couch potato respectively.

It’s an ensemble film with each character having their own story for why they enter Moon’s singing competition, which is told well with sweeping shots through their home city travelling between them to introduce each person, even if it could’ve been executed with some more care.

The characters are elevated by the voice cast as their talents are undeniable. Witherspoon’s sweet yet peppy attitude gives colour to Rosita as she shows hidden talents whilst trying to care for her 25 piglets and working husband. Scarlett Johansson is an interesting choice for punk-rock teen porcupine Ash, as her sultry tones are her strength. In theory, it’s good for her to do something different, yet it can’t be ignored that maybe someone else would’ve been more suited and shine more in this character.

The story is a sweet and simple one. It has its funny remarks for the adults and lots of colour and boldness to make it fun visually. However, it’s extremely predictable and doesn’t really do anything to move the animation genre forward like Illumination Entertainment managed to do with their first release, Despicable Me.

If there’s one thing that’s somewhat notable about this picture, it’s the fact the cast sing their own songs. It shows the breadth of the actor’s abilities and adds something else to enjoy with the film as well as the soundtrack separately.

While the film isn’t mundane by any means, what it does suffer from is being forgettable with a  lack of re-watch ability, if not just for the adults watching. Kids will enjoy silly characters like Gunter, the German enthusiastic dancing pig and surely copy and sing along with the characters but don’t expect to be seeing them replace the banana coloured Minions in the popularity ranks anytime soon.

Sing is out in cinemas January 27th.