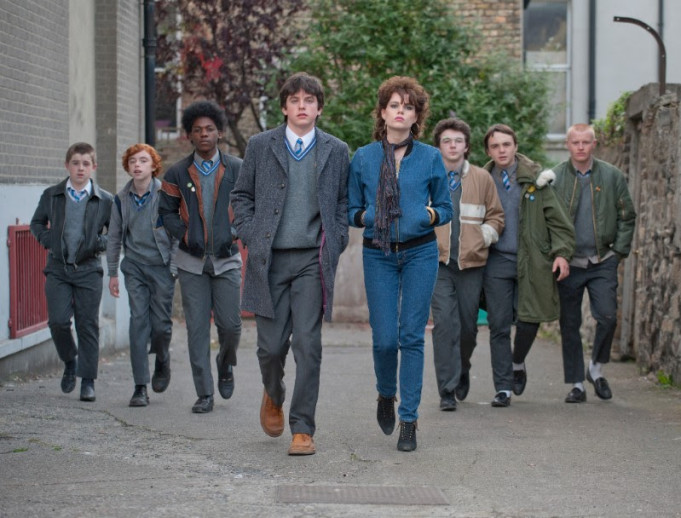 Sing Street takes us on a musical journey of 80’s Dublin, almost like a biographical story of writer and director John Carney’s own youth, taking his inspiration from his own teenage years growing up in Dublin. Struggling with his own identity, it’s a heart-warming coming of age story.

In Sing Street, Conor (Ferdia Walsh-Peelo) comes from a fairly well-off family but it’s a time of recession in Ireland where even the rich have to watch their spending habits. His father has had to tighten the purse strings, taking him out of private school and placing him in an inner city comprehensive, Synge Street.  He finds it hard to fit and see’s himself instantly the target for the school bully and get’s himself beaten up. He, like most teenage boys, develops an instant attraction to a beautiful older girl, Raphina (Lucy Boynton). In order to get her attention he tells her he is in a band and asks her to be in the video. Being a fabrication of the truth he has to get a band together and quickly. Pulling together the most random and musical boys he could find. The boys set out on their journey as Futurists to develop their own sound taking their inspiration from the likes of New Romantics, Duran Duran, and Spandau Ballet as well as The Cure and Depeche Mode. It’s safe to say their sound is an eclectic mix but so utterly good and well polished for a bunch of teenage boys.

To accompany the boy’s musical experimentation they also had the wardrobe to match, walking into school as a group looking like their 80’s idols, bad clothes, big hair and lots of make-up to the horror of the headmaster of the school who bullies Conor for being different. If you’re familiar with Carney’s Begin Again and Once which were full of Irish charm and great musical pieces you’re in for a very nostalgic ride of pure delight. Carney brought on board Songwriter, Gary Clark from 80’s band Danny Wilson. Who wrote the massive hit Mary’s Prayer in 1988. His 80’s musical flair catches the mood of the film perfectly even though there is a track in their which could be a One Direction track.

Conor’s stresses aren’t just music, school and vying for the love of a girl. He has a troubled home life too. His parent’s marriage, played by Maria Doyle Kennedy and Aiden Gillen, is on the rocks too and the brother he idolises, played by Jack Reynor seems to be having a meltdown. Especially, when he gives up smoking pot.

Shot very much like it was filmed in the 80’s with the grainy hues, makes Sing Street extremely authentic especially when you pair it with the badly permed hair and even worse 80’s wardrobe. You could almost feel being transported back to your own childhood as you get lost in this funny and heart-warming story.

Sing Street is out in UK Cinemas May 20th