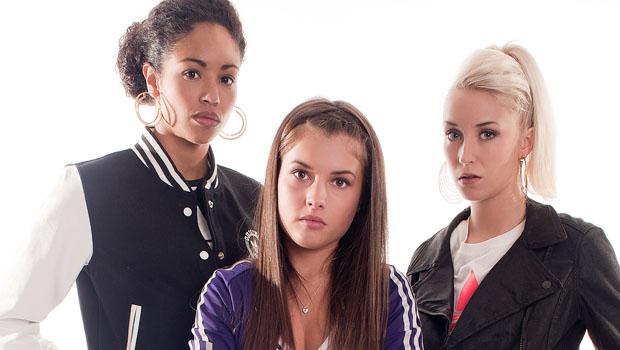 With such an arresting title, Sket is equally as striking on screen. Its harsh but colourful backdrop lures you into a world never previously documented in film and takes you on an emotional roller coaster of sheer intensity, while showcasing the undercover and covert life of gang culture among girls in London…

Sket tells the story of 16-year-old Kayla, played by Aimee Kelly, who has recently moved to London with her sister Tanya. After an altercation with notoriously violent gang leader Trey, played by Ashley Walters, Tanya ends up dead. Kayla is left distraught and angry. With no one to turn to she looks to a local girl gang for support, guidance and most importantly, revenge.

Aimee Kelly tells Flavour how she landed the lead role of Kayla and why the casting directors felt she was the only girl for the job.

‘I went to an open casting for Skins and it was literally The X Factor auditions times 10! I was in the queue for six and a half hours. There were about six rounds of auditions and I was flown down from Newcastle for one of them. In the end it crashed and nothing came of it; but that is where the casting director first saw me. One day I got a call from her, saying, ‘I’ve got this audition, I don’t know if you want to try it, you may as well give it a go; the girl is from London, it’s not really you, but give it a go.’

So I went in with the script, and the director Nirpal [Bhogal] was sitting there, so was Jayne, and I said, ‘Erm, the thing is, I don’t have a London accent…’ And they were like, ‘OK, just give it a go,’ but ‘only because you are here’ kind of thing. So I did it and I got recall after recall and I got the part. It turned out it had taken so long because they had rewritten the whole script just so I could play the part.’

Being from Newcastle, the girl gangs of London are whole new world for Aimee. Her performance on screen had to be carefully moulded by the directors in order to maintain the film’s gritty authenticity. ‘I had to go for loads of writing sessions so they could get the wording of the script right. For example, if I said something like ‘innit’ with a Geordie accent, it just wouldn’t have sounded right. So we had to go through everything and change it all so that it worked just right. It took months, but it was worth it in the end.’

The leader of the girl gang, Danielle, played by Emma Hartley-Miller, takes Kayla under her wing after her sister has been murdered. Despite her hard and violent exterior, Danielle is who the girls go to for solace and a sense of security.

‘Danielle is a complex character,’ says Emma. ‘She is kind of gang leader, but she’s also like the mother figure. She’s very aggressive because she doesn’t know how to articulate herself outside of her aggression. She has these girls who she has taken under her wing individually. She does love them, they are her family; but she’s also quite on her own – she’s inside her head quite a lot of the time.

‘She has a very masculine edge. She was involved with Ashley Walters’ character (Trey) from a young age, which wasn’t pleasant. She is really quite anti-men, but her previous experiences with men haven’t been good. Her masculinity acts as her protection. She puts a bubble around herself and that’s how she protects herself.’

The subject matter highlighted in Sket may come as a surprise to many as girl gangs seem to have gone unnoticed for quite some time. However, as this film depicts, girl gang culture in London is a very harsh reality. Lily Loveless, who plays gang member Hannah, describes how the preparation for her role really opened her eyes to the dark and hostile life of a girl gang member.

‘We had people that used to be in girl gangs helping us with the script and the acting,’ she explains. ‘It’s a crazy world. A lot of people will think, ‘Oh, that would never happen, this will never happen,’ but the stories we heard… some of them worse than what was written in the script. We were told if a girl wanted to be initiated into a gang she would have to let every gang member rape her. You can’t understand why someone would be like that or allow that unless you learn about their background. That’s why this film is so important.’

Rape and sexual assault are issues that are very much taboo among some inner-city communities. Prison is not a good place for rapists or sexual offenders, so the level of sexually aggravated crime showcased in Sket may not ring true to some. Adelayo Adedayo, who plays the quite sexualised character of girl gang member Kerry, believes that not only does this problem exist, but that it actually exists on a much higher and brutal scale. ‘This is why people should give this film a chance,’ she says, ‘because you will start understanding things you never knew existed: Things girls are going through, that they should not be going through – at any age. No woman should have to deal with the things this film shows. Where I grew up would have been considered “urban”, but I never saw this.

‘The first script was a lot more intense. There was a rape scene in it and there was a lot more violence. The gang member we spoke to in preparation for the film was in favour of the first script, because she felt it was a lot more true to how things really are. She thought the end version of the film was actually very watered down. I felt the same when I first saw the script, like, a girl gang – really? Who does that? But when I was reading it, I thought if this is done right, it could be amazing. Especially my character; I was drawn to my character straight away.’

The girl gang depicted in Sket highlights the family aspect of gang culture and the security one can feel when involved. Riann Steele’s character Shaks shows another side of gang life: a lonely and depressing side her character desperately wants to escape but can’t.

‘Shaks is more than Trey’s girlfriend,’ Riann explains. ‘She is his partner, she is the one closest to him. She has grown with him and moved up the ranks with him. She kind of runs the gang with him, but definitely knows her place. She is alongside him, but very much rolls on her own. ‘She can’t afford to have friends. To be the girlfriend or lover with someone like that, it becomes very difficult. There is no way she can have male friends at all, and she is in a position where she can’t trust anyone, either. So to have the kind of relationship she has with Trey, she has to sacrifice everything and everyone else.’

Sket is an intense drama, with an outstanding cast. This is a ground-breaking British urban film, where women take most of the lead roles, and the topic of girl gang culture and its severity is captured with such cinematic and intriguing vision. But don’t take our word for it, the cast have their own reasons why!

Everybody should go and see Sket because it is about relationships, real people; there is action, excitement, laughter. There is every kind of human emotion you can have in a film. It is entertainment, but it’s got a slice of real life to it. There’s something for everybody.

Sket is brilliant. It’s deep, emotional and different. Five girls in the situation they are in… you have never seen that, I don’t care what anyone says, you’ve never seen girls in that situation, in that environment, fending for themselves, in a film before. It will definitely take you on an emotional roller coaster, because that’s what it took me on – and I’m in it.

It explores a world that is hardly ever explored. It’s a crazy world, but the reality is even worse. The stories we heard from girl gang members are much worse than what is in the film. Sket shows an unexplored world – that’s the point of cinema, I think, to explore things you haven’t experienced.

Sket is colourful; it’s a story we have never seen in film. This is Nirpal’s [director] first film and it was in the London film festival. There are people who will say, ‘Oh, another hoodie film, another urban film,’ but how many films have you seen with an all-girl cast or about girl gangs? It gave me an insight – how many other people will gain an insight?