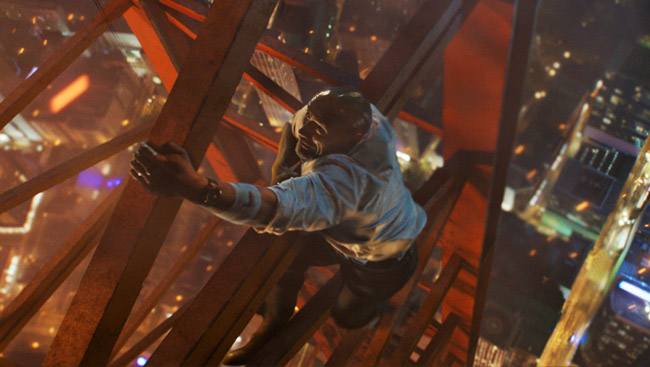 The world’s tallest building, a towering inferno, and Dwayne Johnson’s relentless fight to save his family. What more could you want from a Friday night mind-numbing popcorn movie? Rawson Marshall Thurber’s venture into the vertigo-inducing thriller delivers just that, but there is a sense of déjà vu here and not even Johnson’s charisma can spark a flame of excitement into this CGI blaze.

Johnson’s Will Sawyer is a former Soldier and FBI hostage team leader. Having lost his leg during a hostile hostage situation he now concentrates his time assessing buildings security. On the verge of landing the biggest job for his fledgeling company, he ships his military wife (Neve Campbell) and twin son and daughter to Hong Kong to finalize the deal. With his family housed in one of the apartments in the 3,500 foot – one of the world’s tallest buildings – Will meets the building owner Zhao Min Zhi (Chin Han) securing the contract. But no sooner as they seal the deal events take a horrifying turn.

It’s not long before the similarities to Die Hard and Towering Inferno set in, a criminal squad decide to attack the building, by destroying every floor above the 96th floor with a raging fire. With Will’s family are trapped and it becomes a race against time for Will to save his family against the mightiest of odds.

The premise is overly familiar; Johnson is the big man who will resolve to anything to save his family; including jumping from crane into a broken window god knows how many thousand feet from the ground; dodging exploding fireballs to dangling from a window with only his prosthetic leg preventing him from plunging to his death; he genuinely is the luckiest man alive. Whilst some scenes may force you into realising you have a phobia of heights, there are others where the CGI fails to live up to its believability; he may be dicing with death but the visuals place his feet firmly on the ground.

When it comes to the actual human battles against the so-called criminal elite – made up of your stereotypical henchman running around like headless chickens. Lead by the obvious Eastern European bad man, Kores Botha (Roland Møller) and an Asian femme fatale; we are also granted with a couple of insiders that are as glaringly obvious as a bear shitting in the woods – It becomes a game as to who gets picked off one by one.

With the onus firmly on the action set-pieces – performances are merely a walk in the park. With an ever growing schedule of movies under his belt, Johnson finally stumbles into the blaze with Skyscraper. It’s explosively visceral but its burning entertainment fizzles into one giant wet weekend.

Skyscraper is in cinemas July 12th