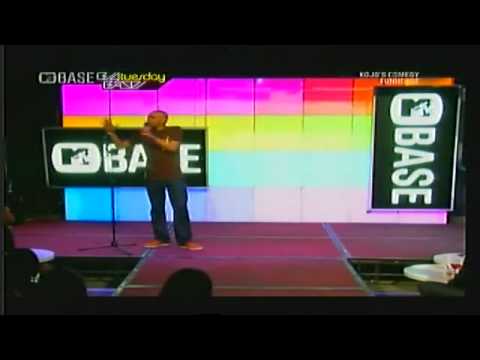 Slim has to be the UK Comedy scene’s best kept secret. Having been in the game for several years with an incredible global reputation, it seems only now audiences from his home ground are beginning to sit up and pay attention.

Through his years within the industry, Slim has successfully toured Europe, The Caribbean and the U.S.A; performing at Jamaica’s Annual Red Stripe Comedy Tour and alongside Def Comedy Jam comics, making him the only black British comedian ever to perform on the Caribbean island and the 1st black UK comic to perform at Hollywood Comedy Store. He has also appeared on several shows and supported some comedic greats such as John Witherspoon (Star of Friday and Boomerang), Felix Dexter (star of BBC2 Absolutely Fabulous), Robbie Gee (star of Guy Ritchie’s film ‘Snatch’), Bill Bellemy (Star of Def Comedy Jams “How to be a player”), Kevin Hart (star of “Soul Plane , Scary Movie 4”), Mark Curry (star of “Hanging with Mr. Cooper”).

With so much under his belt, it truly is a wonder why Slim is not a house-hold name here in the UK. I spoke to Slim about the industry he has conquered so easily, and his thoughts on the future of it.

Why did you first get into comedy?
I actually got into comedy by luck. I knew i was funny but had never thought about doing stand-up until meeting and becoming friends with Comedians Curtis Walker and Ishmael Thomas who took me to shows and encouraged me to try and write and perform.

Who would you say are your inspirations?
It would have to be Curtis and Ishmael and my dad (who i still find hilarious up to today)

What else do you do besides comedy? What are your other interests?
You lot at Flavor are nosey – Why you don’t mind you business !! [laughs] I tend to just chill out with my kids or with friends when I get a day off.

What other profession do you think you would you be working in if you weren’t a comedian?
If I wasn’t a comic I’d still have a job that’s not your usual 9-5, like a fireman or a boxer… [thinks] Slim middleweight champion of the world sounds good !! [laughs]

What’s your best joke?
Best Joke? All my jokes are good. [laughs]

What’s the best joke you’ve heard that you wish you had thought of?
Eddie Murphy in Delirious talking about his family cook outs, when he’s dad gets drunk and curses the whole family out. My dad don’t drink, but he curses and would do something similar.

Do you remember your first gig?
Curtis Walkers 1st one man show at the Hackney Empire in ’94’…it was a full house of 1,200 people and I was… urm… very nervous to say the least.

How do you think you have developed as a comedian?
Yes, it would be hard for any body to stay in any business if they didn’t develop, especially the entertainment industry.

What do you think makes you different from all the other comedians around at the moment?
We’re all different with different styles. I think I am successful because I don’t try to make jokes, just write about life in a humorous way, i think thats what the audience can relate to with me.

And what do you think of the whole UK comedy scene at the moment?
The black UK comedy circuit is getting bigger slowly but surely, mainly down to there being more comedy shows, promoters and the fact that black folks want more than just raves for entertainment.

Do you think it has changed from a few years ago?
Yes and no. There are more black comics out there than when i first started, but there is also less tv exposure to showcase are talents to the masses.

Where do you think the UK comedy scene is heading?
Upwards, I can’t see why it should go into reverse.

There are so many ‘comedy shows’ at the moment, don’t you think? Do you think the market has become too saturated?
No. You can never have too much of a good thing….as long the shows are quality and there’s paying customers who come and support then I can’t see why that would be a bad thing. Plus it keeps everyone (Promoters and Artists) on their toes.

The whole industry has boomed in the last few years, why do you think that is?
The Internet. God’s gift to the businessman/woman. People are now able to hold shows and just use social sites like facebook, twitter and myspace to advertise and invite. No need for expensive flyers. Cuts out the middleman.

What do you think the UK comedy scene is missing?
A household name whose a black comedian “like Lenny Henry” is. Richard Blackwood I think would be the nearest we have to a household name as most people know who he is in England.

Would you go to America to be successful?
Hell yeah, no matter what people say, America is a entertainment mecca. I’ve been going over there since 2006 and just get a buzz about performing the circuit over there. I see them as a challenge.

A lot of American comedians (e.g.: Eddie Murphy, Chris Rock, Chris Tucker, Jamie Foxx, even Richard Prior) went from stand-up comedians, to other industries such as movies, and some even music. Would you ever do the same?
Yeah, I think so.

Which industry would you like to move in to? Why?
Got to be TV and movies,who wouldn’t want to be part of a great comedy film or TV series. I leave the singing to those that can!!

Which comedian do you think is doing well at the moment? Who should we look out for in the future? Kevin J is on fire right now, so is Miss London, what do you think?
I think they both show potential to develop there skills and have a good career.

What’s your advise to any other aspiring comedians out there?
Be yourself , be sure your funny, keep writing and have patience…. Rome wasn’t built in a day. There’s no quick route, just hard work and determination!!

To purchase your tickets for the Black Tie Awards click here