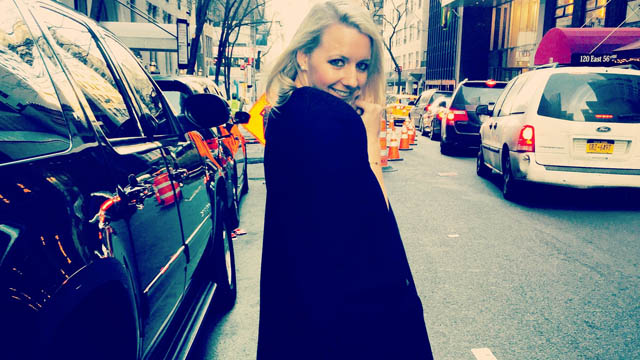 Having forged an amazingly successful career in London, Sophie Pape has taken her huge work ethic to New York where her ambitious streak has seen her propelled to the pinnacle of the New York social circles. It’s a transformation from a journalist on massive publications like Vanity Fair to the director of her successful company Papetta specialising in all things event management.

Sophie Pape is THE social butterfly Taking New York, London the globe and while she guest edits this month’s Flavour we also got a chance to talk to the socially connected lady about among other things where to go if you want to take a lady (or man) for a night of indulgence in the city that never sleeps-New York.

Taking the hard road to America.

I had no help from my parents in fact they made it as hard as possible for me to leave because they did not want me to go. I rocked up in America with two hundred bucks in cash-I did not get paid for the first 6 weeks and I was living off dollar pizzas. So when I get these emails asking how I did it moving from the UK to the US I say it was purely hard work, doing bitch work at times and just being absolutely everywhere in terms of the social circles and the night life.

I love the way that not many of the people from New York are actually born and bred in New York most people seem to gravitate to New York to fulfill their aspirations. The talent pool in New York rather like London is really deep and you have to be the very best to make a mark here. One thing that is totally different about London and New York is this whole dating thing, it’s like controlled carnage-everybody is dating everybody else. I was dating one person at a time and then I would find out that this person had been sleeping with such and such person. I am very much an ‘English’ lady with an ‘English’ way of doing things- I still cue up for things! The show is structured reality so it draws from reality but the producers certainly create situations where these things will be heightened so it is a very alien world to be in and you are acutely aware that you are in episodes because the producers do brief you that way. It’s strange because all your conversations have to be filmed on camera so you don’t necessarily talk to them the way you would if you were to talk one on one.  You might have things to say to one of the other casts but you cannot just talk to them, you have to call the producers and let them know and they might say be at this café in half an hour and then I get my conversation and they film it.

And who is Sophie Pape?

From a work perspective I have been really lucky in a way because I have worked for some great titles. Initially, I started working at Elle magazine assisting and writing on the fashion and beauty sections. I spent some time there before getting onto Harpers Bizarre in the fashion section writing and event management it was an amazing place to be at.

The lure of travelling abroad got me and New York (which I love) was my destination where I got a job with Vanity Fair which was huge but in truth I had my eye on a larger fashion magazine. I sent my cv and I got the job and I was there for two and half years.

Now I have set up my own business called Papetta Inc and that’s been running for about a year.

I love being the person that can help people to get out and enjoy themselves and I really like being the person that can help to make that person’s time great when they hit New York and that is how Papetta really came about. People were approaching me to set up their events or do strategic management. So I set up my consultancy forming strategic partnerships with people. I will produce events and organize everything from; catering to booking talent. The other arm to the business focuses on creating media relationships where I will create a strategy for that client; so if someone wants Adele to sing at their event then I will try and make that happen.

Lastly, how would someone get hired by you so they could be a social butterfly like you?

To be hired by me, you would have to be resourceful, diligent, get into the office before me and leave after me. A great employee or assistant comes to me with solutions not problems. Only when they get really stuck does someone say, “I can’t figure this out – what do I do?” And at that point I’ll never be mad -I will figure it out. They also have to be preemptive-it takes time, but the best assistants know what I will need and when I will need it. They also need to have a great sense of humour, which is really important!

Cocktails at the Top of the Standard which has this incredible 360 view of the city and you would speak to Lily. Tell her you are friends with me and she would probably give you some truffles and champagne of the house.

Then you would go to Toro a tapas place I did my birthday party there and the food was just amazing so you would speak to Doug Jacobs who are my friends.

Then you would see Disco On The Door at the new Bungalow 8 it’s actually called Number 8 but Bungalow is like their satellite where they will do pop ups. There is a secret spot there called the Rec Room where you would dance the night away and have loads of fun.

The climax would be The Top of the Standard which has the incredible floor to ceiling windows so there is a sign on the bed that says be careful people can see you from below when you are otherwise engaged.