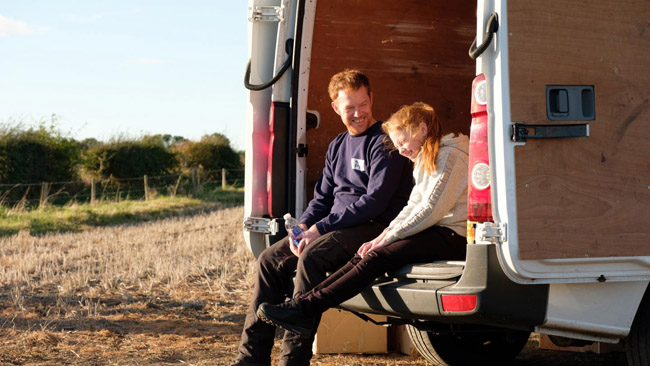 Ken Loach is back on his socialist horse three years after I, Daniel Blake hit right at the heart of austerity Britain. Once again he shouts loud for the working class grafters hit hard by poverty, trying to earn a living in a battered and divided country with relentless passion.

The story focuses on one young family in a docu-soap format in the north-east of England struggling to make ends meet after the Tory’s power has taken a grip on the widening bridge between the rich and the poor. Ricky Turner (Kris Hitchen) wants nothing more than to dig his way out of the poverty hole that was dug after losing his job. When he happens upon an opportunity to start his own franchise for a delivery company he goes cap in hand to wife Abby (Debbie Honeywood) – who is a zero-hours carer – to sell her car so he can afford to buy his own van to kick start the new business.

Whilst Ricky’s business, darting from one address to another across the city, begins to take off, the firm start to pile on the pressure by loading him up with more deliveries. Abby on the other hand, even though she loves her job has started to despise the way in which the sick, elderly and infirm are left by the wayside by the governmental hacks. As Ricky spends more time away from home for work (any unexpected time off he has he is fined by the company) the cracks begin to appear in his little family’s unity.

Loach delicately unravels the stress that austerity has on the normal working-class person, especially families, it’s not just the adults that suffer it’s the children too. The couple’s teenage son Seb (Rhys Stone), although a talented young artist, starts to play truant from school and disrespecting his parents causing all kinds of tension and anxiety especially with their younger daughter Liza (Katie Proctor).

The underlying villain of the piece is the unseen face of the Tory leadership and the austerity measures put in place that have caused a fractured and broken Britain. Loach highlights the fake imagery and lifestyles that social media platforms portray are not representative of what’s really happening in the country. However, there is a standout villain here in the form of Rickey’s boss, Maloney (Ross Brewster). A cold-hearted Ross Kemp lookalike that cares more about meeting targets and deadlines even when Ricky’s van is robbed on a job and he is hospitalised from the attack.

If there is anyone you can count on to be the voice of the working class masses, look no further than Loach. Once again he takes it deep to the streets to shine a glorious light on the poor shouting at the top of his voice just because they are poor doesn’t mean they are lazy.

Sorry We Missed You is out in cinemas November 1st.