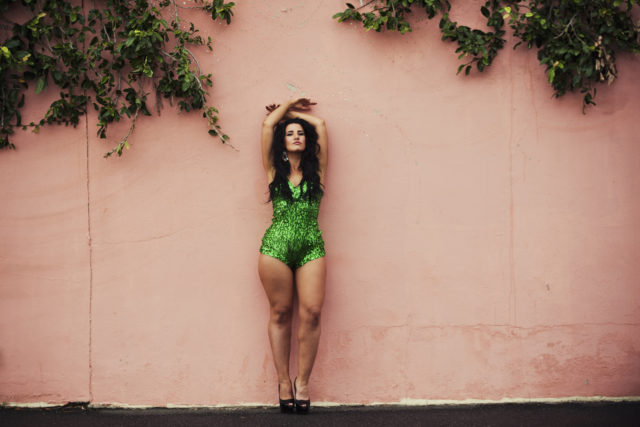 At first glance Aussie soul singer Zoe K is not what you’d expect. One could easily assume she’s another pop singer, but once you hear her sing, her voice instantly captures your attention.

She flawlessly intertwines jazz and soul together creating beautiful majestic music that you can also tap your feet to. Having just released a song called ‘Put It Down,’ featuring Mister Goldfinger, Zoe is now gearing up to release her album ‘It’s Just What I Like’ which was partially recorded in New Orleans.

We chat to Zoe about her upcoming album, why a drag queen loves her wardrobe and why she becomes the worst rapper when in the shower.

You just released a new track, tell us about it.

The song ‘Put It Down’ was written after I noticed that phones, although they are good for communicating there is also a sense of disconnect.

How did you link up with Mister Goldfinger?

I met Mister Goldfinger (aka Ray Angry) at a Tuesday night Jazz jam at Zinc Bar while I was in NYC. We stayed in touch while I was back and forth from New Orleans and Australia, his work ethic and drive was a great source of inspiration to be around. So you could imagine how flattered I was when he said that he would like to help add something to one of my songs. That being a very Herbie’esque solo.

Big hair, patting cute dogs and sequins. I literally had my friend who is a drag queen nearly faint when he first saw my wardrobe, which is a pretty amazing compliment.

What’s next for you, you have an album coming up?

Yes, the album will be released on the 8th April, the album is titled ‘It’s Just What I Like.’ Namely after my cross between soul and jazz. I was worried that the purists might get all sad with it not being in a particular genre, I was always getting told I’m too ‘jazz’ for this bill or I’m too ‘soul’ for this, so I figured I’m going to write an album that incorporates my influences within the jazz and soul era. And also that it is ‘Just What I Like’.

Top 3 songs you used to dance to when you were younger?

The first one would be Mariah Careys ‘Fantasy.’ Second, Parliament of Funk ‘One Nation Under a Groove,’ and lastly ’Tell Me Something Good’ by Chaka Khan.

Favourite song to sing to when singing in the shower?

Oooh, I asked my flatmates and they all said that it would be the song that goes “Someone to waaaaaaaatch over me,” so I would say that it would have to be Etta James version of ‘Someone to Watch Over me’. Though saying that, the shower is where I also become the worlds worst rapper too.

Any chance of coming to the UK?

There are plans of coming to the UK mid 2018

Amazing and surreal I first visited New Orleans as a music lover who wanted visit cities in America where my favourite artists have played. New Orleans is such a musically historic city that I fell in love with it straight away, but also it is the people who make the city as special as it is.

The opportunity came to record in New Orleans after meeting Mike Bass who plays for Trombone Shorty, here in Australia. I had told him of my love for the city and how I wish to return there. It was after I was telling him my plans to record an album he suggested that I record it over there, I had already started recording here in Melbourne, Australia so I took he remaining songs over there and got myself a dream team of musicians. I figured that as long as I have the rhythm section sorted which I also got Terrence Houston on drums, I’ll find the rest when I get back to New Orleans. I’m always out at gigs and I’ll find the rest of the players there. And then I met Raja Kassis out the front of Vaughns on a Thursday night and then two weeks later he was playing on my album. That’s why I love New Orleans, it draws in the same parallels of the music community that I grew up with here in Australia.