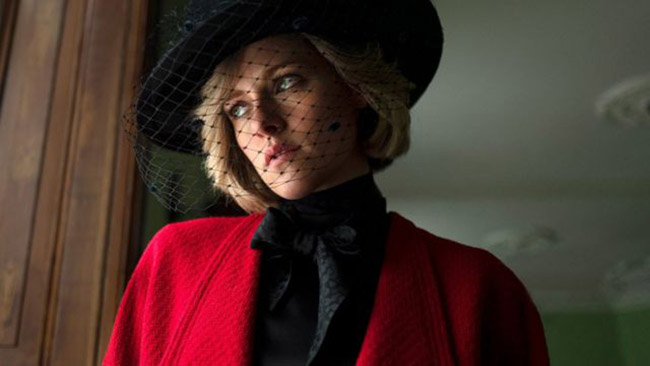 Jackie director Pablo Larrain seems to have a taste for making movies about iconic female figures. With the 2016 film focusing on First Lady Jackie Kennedy in the aftermath of John F. Kennedy’s assassination, the filmmaker turns his focus to Princess Diana (Kristen Stewart) in this self-styled “fable from a true tragedy”.

It’s a Christmas weekend in 1991, the Royal Family gather at Sandringham for their traditional Christmas get together. From the outset, Larrain paints a vivid picture of the loneliness of Diana as she drives herself to the estate alone, and in the days before Sat Nav, finds herself getting a bit lost before being found by a member of staff and escorted to the house. Diana, at this stage of her tragically short life, was in the midst of a media storm. The breakdown of her marriage to Prince Charles (Jack Farthing), not to mention being mentally fragile and battling bulimia all began to play a contributing factor in her life.

Paired with an institution she can no longer stand, her desire to break free from the shackles is not only stifled by the family that only see her as “currency” but from the staff who dictate her every movement because “that’s how it’s done”. This contributed to a mental state rather disrespectful in her portrayal with the inclusion of the hallucination of the ghost of Henry VIII’s second wife, Anne Boleyn, in the damp, chilling walls of the grand house.

Drenched in a cold and uninviting aesthetic, there is nothing warm or cosy to adhere to the story. Written by Stephen Knight, we are greeted with cruelty in its characters and awkward performances. Kristen Stewart’s Diana is an exaggerated imitation based on hyped-up televised interviews. Farthing was completely miscast for the role of Charles due to the lack of any nuance to the character. After all, why would you give any depth to any other character that was supposed to be the catalyst of all of Diana’s problems?

There are moments in which Larrain wants to highlight Diana’s struggles with her mental health, sometimes she shows strength and clarity but there are other moments, especially for a so-called fable, that take her mental breaks a step too far. We witness her running through the halls of Sandringham and Prince William being the one at his young tender age having to try and calm her down only for her to turn her back on him. Another telling moment comes from Diana making more than a scene at a Pheasant hunt in which she snatches both her boys away.

Dull and empty of any emotional connection this is over the top art, it’s got nothing to say of any real value but it says it way too loudly. Most of all, it’s rather highly disrespectful to the memory of such a beloved figure.