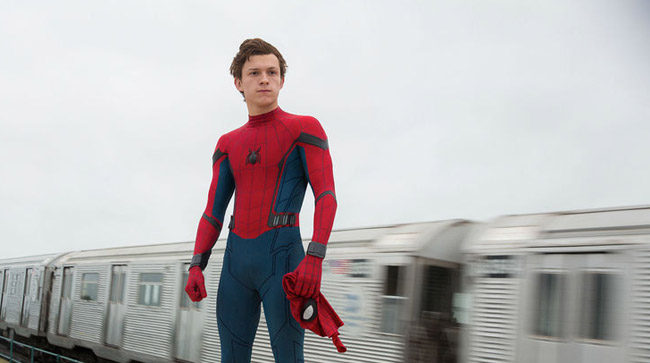 It seems reboots of Spider-man are ten a penny but this time around, Sony has opened its doors to the advice and guidance of Marvel to enhance its Spidey senses in the hope of injecting life back into our friendly neighbourhood Spider-Man and Holy Avengers they’ve made a triumphant return with an excitable and charming schoolboy hero and a clever script to boot.

Instantly, Tom Holland’s 15-year-old Peter Parker goes beyond the likes of previous Parkers in the form of Toby Maguire and Andrew Garfield, stamping his fresh-faced, boy-like innocence and physical wit all over the role were he made his brief debut in Captain America: Civil War and this is the point in which Homecoming begins its structural journey into an engaging teen movie with all its growing pains and optimism and Avenger cameo’s.

Cleverly merging the battle scenes of Civil War with Homecoming, the over excitable Peter Parker is now under the wings of Tony Stark (Robert Downey Jr) but only on an internship as he learns the ropes of becoming a true Avenger. Armed with a new Spidey suit courtesy of Stark Enterprises, Peter spends weeks waiting for that all important call into battle while roaming the streets at night as Spider-Man to combat crime believing he is ready to play a bigger part in crime fighting despite what Stark and his right-hand man, Happy Hogan (Jon Favreau), think. Peter spends his days being a normal teenager with normal awkward teenage problems. Roaming the school halls with his best friend Ned (Jacob Batalon) and crushing on the beautiful and popular Liz (Laura Harrier) but lacking the confidence to talk to her.

In the meantime a new villain has emerged in the discontented Vulture (Michael Keaton), except this villain isn’t a straight-forward kind of evil we all expect from the comic book universe. Still, with that streak of venom and a nonchalant attitude to accidentally killing someone at the heart of the character lays a working class man who suffers at the hands of Stark’s elite and wants to make him pay in a war of the classes.  Using material left over from previous Avenger battles, Vulture builds his own arsenal of weaponry and sends his men to the streets to take what he thinks is due to him.

The fairly unknown Jon Watts takes the helm on Homecoming, where others might feel intimidated coming into a franchise with so much riding on a successful deliverance Watts has shown confidence in his direction in keeping with the Marvel staples. The script is intelligently written and is constant in its tone; Homage is also paid to the 80’s Iconic filmmaker John Hughes not only in Homecoming’s tone but in a cleverly scripted scene referencing Ferris Bueller’s Day off.

Holland proves to be the perfect choice of actor to play the teenage Spidey, his excellence is his delivery is wholly believable and outright lovable and Keaton’s layered villain cements even further the ease in which Keaton makes of his roles his own. The young cast that surrounds Parker is full of exciting talent; albeit small roles the likes of The Nice Guys Angourie Rice, Parkers love interest Harrier alongside the astonishingly hilarious Batalon and snipping tongue of Zendaya give Homecoming an exhilarating edge.

Spider-Man: Homecoming hits all the right notes of pure entertainment balancing the witty with the dark and a killer of a twist that earns a rapturous applause. We may live in a cinematic universe overrun with one superhero after another leaving barely any room for other forms of big screen creativity but this web-slinger keeps you encased in its web.