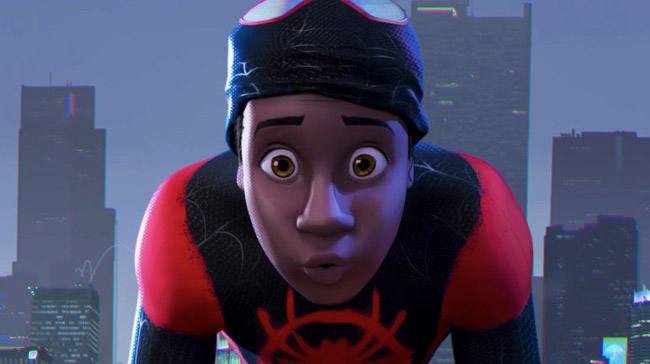 All we needed was another Spider-Man movie… or so we thought. After losing count on how many time’s Peter Parker stories can be told for the modern audience, The Lego Movie’s Phil Lord and Chris Miller have injected a delightful originality to the animated story of Miles Morales’s incarnation of Spidey that could have spouted the same old origin story.  It’s been a while since an animation has delivered something that feels classic but so fresh and completely new at the same time weaving its web of enchantment.

Focusing on the young mixed-race kid, Miles Morales (Shamiek Moore) – based in the same timeline as Peter Parker – this is an explosive origin story of an academically gifted kid who spends his days listening to old-school hip-hop, indulging in graffiti and spending time with his wayward Uncle Aaron (Mahersala Ali).  Miles is certainly the focal point of the storyline but we are also given a taste of multiple forms of the Spidey hero from various alternate dimensions, unravelling not just one origin story but five.

Miles finds himself at the centre of possible world destruction when Kingpin (Liev Schreiber) opens up a portal to other dimensions. Thankfully for Miles, this portal sucks in multiple Spidey’s into his dimension who guide and train the newbie in his new role. Although the influx of the alternate heroes, which include a portly, depressed and weathered Peter B. Parker (Jake Johnson), Spider-Woman Gwen Stacy (Hailee Steinfeld), An anime-inspired Penny Parker (Kimiko Glenn) accompanied by her mechanical pet spider, a 1950’s typical detective suited Spider-Noir (Nicolas Cage) and the Looney Tunes Pig Peter Porker (John Mulaney), may sound like overloaded character plot’s taking the limelight off Miles it never feels as though he is overshadowed. Instead, he is given time to engage with his new powers as the story develops.

The picture is also truly unique from a visual standpoint, for an animation, this has a style in a class of its own with its 2D imagery but with a 3D tinge. It takes a little getting used to but soon becomes blended within its high octane action pieces across a split screen in keeping with its comic book illustrations that impress even those (me) who have no inclination or insider knowledge of the comic book genre apart from what’s been portrayed in the cinematic universe.

Poking the finger of fun at the normal superhero clichés and indulging in a number of hilarious visual gags, Lord and Miller have distilled a huge amount of wit and heart into their storyline, investing an emotional core at the heart of Miles story and the tragedy that befalls him, you’ll be behind the timid and unsure youngster every step of the way as he helps the alternate Spidey’s return to their dimensions.

For someone that went in blind and as cold as a wet fish for this, as for Superhero movies, this is one I can truly get on board with. It has major audience appeal both of the child and adult variety, it’s a wondrous web-slinging caper.