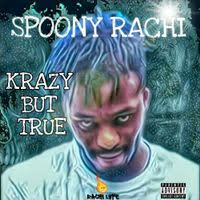 Up and coming Hip Hop talent, Spoony Rachi is set to release his latest EP Krazy But True on the 17th May 2019.

Krazy but True pours out an authenticity Hip Hop flare, with its passion-filled lyrics and raw imagery that blend in every line. Like his best work to date, this track is a direct reflection of both Spoony Rachi’s unpredictable lifestyle and unmatched talent.

Overcoming what can only be described as a rocky beginning, from being an all American high school football star, to becoming a teenage father, turning to the streets, going to prison twice, getting shot in the chest 4 times almost dying, recovering relearning how to Walk again, to now co-founding his label and recognising his talent and finally taking himself seriously as an MC to now dropping his first worldwide project that is a mirror reflection of his life.

Spoony Rachi’s journey to artistry is one to celebrate. Every obstacle and every battle not only inspires his deep lyricism but also gives Spoony Rachi another reason to push forward to achieve his potential.

Today, this incredibly talented musician and self-made entrepreneur produces, freestyles and co-owns his own record label Rachi Lyfe Entertainment LLC. The company now holds a roster of talented urban artists who deliver a fresh soundscape to the ever-changing industry.

Hailing from Flint, Michigan originally but later moving to Cobb County, Northside Atlanta, Spoony Rachi has grown up surrounded by a range of musical influences. But, his biggest inspirations come from Rap legends such as Jay Z, Biggie Smallz, Tupac, Lil Boosie, Lil Wayne and others.

Spoony Rachi will release his latest EP Krazy but True to all major digital platforms from the 17th May 2019.