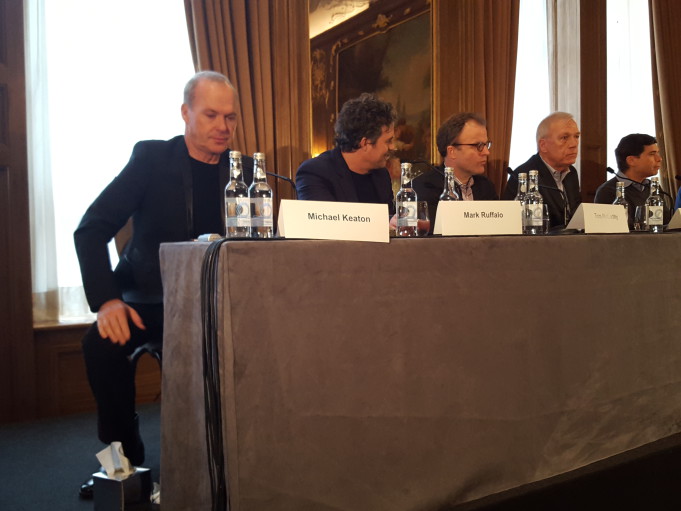 Next week see’s the release of critically acclaimed Spotlight, which has been nominated for six Oscars –  some of the cast and real life investigative journalists the film portrays in town for the London Premiere Flavourmag caught up with the crew at the London Press Conference. This highly important film tells the story of the Pulitzer Prize winning team at the Boston Globe when they unearthed and reported on the enormous amount of shocking amount of sexual abuse cases on children by Catholic Priests and the systematic failure of the church to do anything about it and blatantly went to any lengths to cover it up. Even though this caused shockwaves around the world at the time, Director and co-writer Tom McCarthy has taken on this story to bring it all to our attention again, hoping to put an end to this vile act for good.

Walter ‘Robbie’ Robinson on when he first heard the film was to be made was in total disbelief, It never occurred to him to anybody would find it interesting on how the reporters did their work. Over time we came to realise that Tom McCarthy did so much of their own reporting they seemed determined to make the story almost precisely how it had occurred. On the importance of the film, its subject matter Michael Keaton (who was full of cold) who plays Walter Robinson the Editor of the Spotlight team said ‘For me I’m blessed, I get to do what I do for a living and that’s fantastic, then you get to work with these actors and Tommy and the journalists and that’s a bonus. I’m blessed to be able to tell a story like this as who wants to deal with this subject every day. You’re in a position as someone who does this every day, gives you a cheque (very small) and say something about something that may just convince and change people’s lives. It was really a great and really satisfying experience. It may sporn more opportunities to make movies about something. Mark Ruffalo who plays Investigative reporter Mike Rezendes, was asked about the opportunity to work on a film like this said when I read the script I immediately felt this is a story we have heard but it’s time to revisit it again and the culture is ready to revisit it. There is a space for this to really resonate in the world; it’s in those moments when film is used as a tool to teach. It’s just a great honour to be in the right place at the right time and to be a part of that dialogue. It doesn’t happen that often in a career, it doesn’t even happen that often in film making where you can really influence the conversation and push an issue in one direction or another. Mark Ruffalo who is widely known for his environmental activism and more also paid tribute to journalists and journalism in how important it is for it to affect social change. If it wasn’t for Mike’s work and with only three articles he single-handily changed the State of Boston’s legislation. Keaton added he hoped the film would inspire the next generation of journalists.