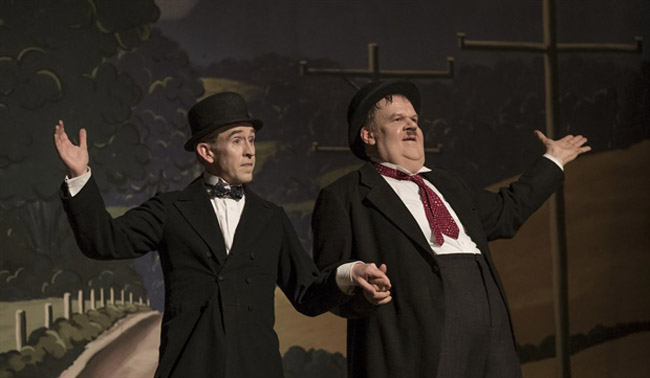 A touchingly poignant journey focusing on the twilight years of the legendary comedy duo.

Iconic comedy duo Stan Laurel and Oliver Hardy were once the darlings of Hollywood but money issue’s and contract negotiations became a contributing factor to their strained relationship. Director John S. Baird respectfully focuses not on the highs of the career, but the dwindling twilight years that forced the pair back together with melancholy fervour.

Beginning at the end of the height of their careers, Baird lays the groundwork introducing the problems that started to cause the crack in their working relationship. Enveloped in money issues from gambling problems and their love of women and divorcing wives, Stan (Steve Coogan) is currently coming to the end of his contract with the studio and wants to take the partnership to a elsewhere were they will pay them what they are actually worth, but Ollie (John C. Reilly) is still under contract and feels a certain loyalty to stay with who he knows.

Fifteen years later, the men haven’t worked together in years, Ollie has serious health issues but Stan has a script on the go ready for their comeback. In order to get that film contract, the pair takes on a tour of England to sparsely filled theatres from Glasgow to London, a tour which has the men rekindling their friendship.

Fully coated in a gentle tenderness which is matched beautifully with the cinematography Baird skips back and forth between the past and the present to build out the issues and hurt feelings that broke down the relationship between the pair, the main culprit being Ollie leaving Stan high and dry at a studio meeting while he was paired with a new comedy partner for a film, finally breaking the act in half. It’s an issue that cut Stan like a knife, for him, loyalty was everything and that broke him, Coogan and Reilly in possible their career-best performance, play this out with such convincing conviction it’s hard to fathom they are actually not the real deal.

Just like the comedy partnership, it’s full of slapstick comedy and when their wives, the Russian over-opinionated ex-dancer Ida (Nina Arianda) and the over-protective Lucille (Shirley Henderson), arrive in London to accompany their husbands, the comedy steaks are doubled as they almost mirror who their husbands are. But its crowning glory is the many tender moments between the men. After Ida lets out the cat amongst the pigeons with a comment that reveals Stan’s problem with Ollie teaming up with someone else, a surmountable argument ensues leading to Ollie having a heart attack. The resulting scene see’s Stan constantly at his bedside feeling nothing but love and loss of their past friendship that oddly mirror’s one of their own skits, but it’ll tag hard on those heartstrings.

Director Jon S. Baird has created a touchingly poignant journey focusing on the twilight years of the legendary comedy duo. You can’t help but fall in love with Steve Coogan and Jon C. Reilly as they encompass the very souls of their characters.

Stan and Ollie is out in cinemas January 11th