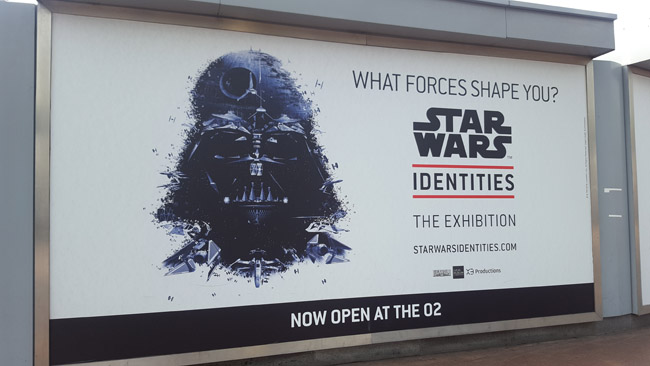 Last week, Flavourmag’s Film Editor, Zehra Phelan took a trip down to the Star Wars Identities Exhibition at London’s O2 to find out what all the fuss was about and came out a converted Star Wars fan.

The exhibition, which has been running since November last year, is a full-on interactive experience to be enjoyed by both adults and children alike. Not only is the visitor immersed into the world of the Star Wars universe but you are also given an educational experience as to what shapes each and every one of us into the person we become which is tied in nicely to your favourite Star Wars characters. So, what can you expect from the exhibition?! Each visitor to the exhibition are given an ear piece and device to wear, throughout video stations, are placed at key points that have been developed by scientists from the Montreal science centre which play when activated by the device. Each video brakes down key components from genes, culture, friends and family from childhood to adulthood explaining what shapes us and integrates this with stories and video’s of Star Wars own Luke and Anakin Skywalker. Not only that, but each visitor is also equipped with their own wristband, why? So you can choose your own Star Wars character to build them through a serious of interactive questions to form who they eventually become come the end of the exhibit where you chose whether to turn to the dark side or not integrating the visitor into the exhibition.

The main exciting core of this exhibition is, of course, the array of spectacularly displayed memorabilia from every episode of the Star Wars saga. The exclusive collection of 200 original pieces has been specially selected from the archives of Lucasfilm. From concept art for the likes of Yoda to Darth Vader to the amazing assortment of Battleships, models of R2-D2 and the Stormtroopers to costumes and props for Obi-Wan Kenobi, Princess Leia, Luke and Anakin Skywalker and Darth Maul. Each piece gives you a fascinating insight into how the characters were developed from storyboard to film bringing to life the characters thousands have taken to their hearts.

The Star Wars Identities exhibition is a fun, impressive and deeply thrilling experience for all the family to enjoy, not just the kids or die-hard fans but even those who don’t have much interest in the whole saga.