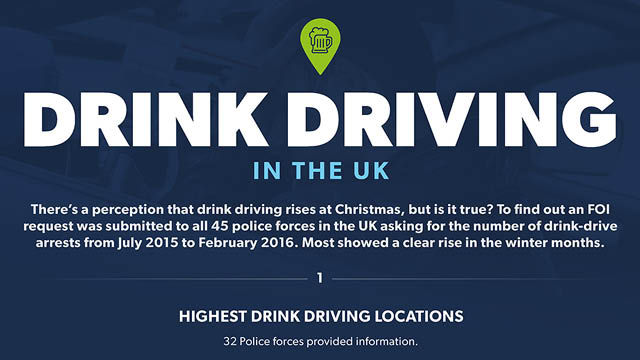 We seem to hear about drink driving more during the winter months, especially around the Christmas period. In many areas of the UK, there is a recorded increase of accidents and arrests on our roads due to drink driving.

In a bid to help combat the problem, Jennings Motor Group has launched a useful resource to help people understand what they are legally able to do, to stop someone they believe is about to drink and drive: www.jenningsmotorgroup.co.uk/drink-driving/

“The issue around drink driving around the festive period is covered every year; however, the shocking statistics make it all the more real. We want to ensure you know exactly how much this problem is affecting the whole of the UK.

“We wanted to create a useful resource for people to get a full understanding of  what they are legally allowed to do when they are faced with a drink driver, or someone who is going to get into their vehicle after a few drinks.

“If you are in this situation yourself, please remember to find a designated driver, leave your keys at home, or book a taxi. The money spent on that journey is drastically minute in comparison to how negatively your life could change being involved in a drink driving accident.”

Included in the resource is the statistics of an FOI request from 32 of the 45 police forces around the country, revealing the number of drink driving arrests made between the months of July 2015 and February 2016, a video explaining exactly what you are allowed to do when faced with a potential drink driver, and case studies of real people who have been affected by drink driving in some way.

The study revealed the top 10 locations around the UK with the highest number of December arrests, shown below:

Below is a league table of the bottom 10 locations around the UK for December drink driving arrests:

Below is a league table of the top 6 locations around the UK with the highest increase of drink driving arrests in December than their monthly average: