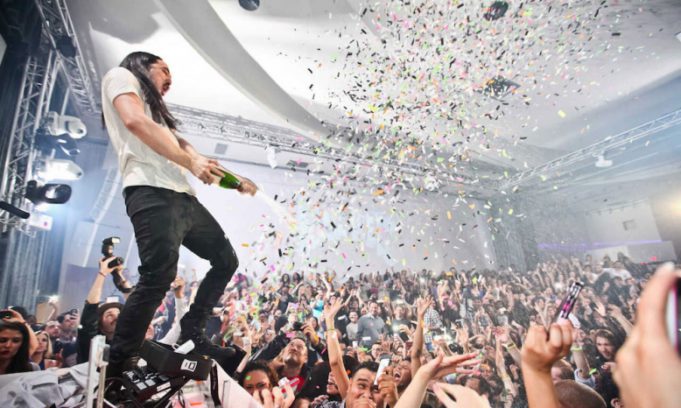 Fresh from the release of his new album Kolony, two-time Grammy-nominated American DJ Steve Aoki returned to the UK in January for more headline shows, cake throwing and even more champagne.

Steve Aoki first came to my attention when he collaborated with Louis Tomlinson on Louis first solo single ‘Just Hold On’.  Aoki has been named the ‘EDM King’, which the crowd surely interpreted.

I have never been to a show like this before and was blown away by the immense crowds and the party atmosphere that Steve Aoki brought to the stage. His energy levels are unreal, the laser lights and background graphics added another dimension to the show. One of the highlights for me was the cake throwing and the world-class Belaire Champagne shower.

Following a partnership with bubbly brand Luc Belaire, Steve Aoki has been using his favourite cuvée Luc Belaire Gold to spray his adoring fans at every show. Belaire’s most recent release of limited edition, luminescent bottles called Belaire Fantôme even includes a bottle with Steve’s own face on it, so fans can expect to see this cool new design being integrated across his performances! Check out the bottles below….

Steve’s shows are definitely somewhat distracting, there’s so much going on at once. The lights, the action and of course Aoki himself jumping up and down on stage while teasing the audience and then running back to the decks to drop the next mix.

Aoki surely knows how to put on a show because it’s not as easy as it looks, the only odd thing about the show was the 11 pm curfew time which we were a little disappointed by, as we weren’t ready to give up yet! Not to Brixton Academy, we want these show to go on all night, what’s up with these 11 pm curfews eh?