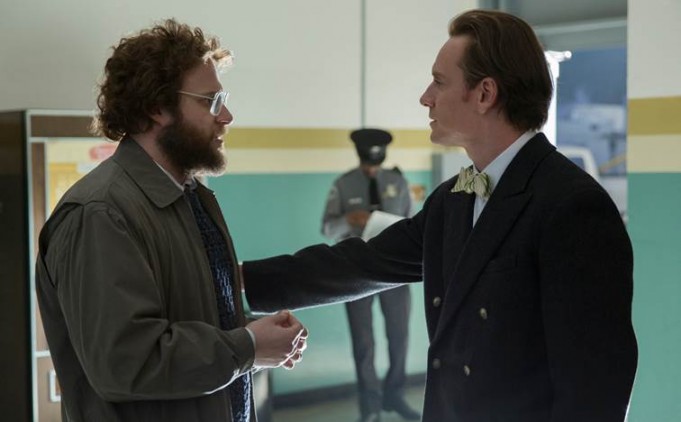 It’s no easy job taking a film which is heavy on dialogue and set behind the scenes of only three pivotal points in the career of a man and make it so entertaining you simply cannot take your eyes off the screen.

Directed Danny Boyle, alongside Michael Fassbender and Kate Winslet, has done just this, sucking in the audience and holding onto its attention like it’s very life depended on it. As mentioned the film is set at three pivotal points in Job’s career. We join the film in 1984; we are backstage of the launch of the Macintosh, the all in one desktop computer which was the face of Apple throughout the 1980’s. Things aren’t going quite to plan and whilst Jobs (Michael Fassbender) seems calm everyone else around him is panicking, but he wants to hear no excuses. We also witness a vile and egotistical side to the man that so many holds in high esteem as he disputes the validity of his eldest, Lisa being his daughter. Winslet plays, Joanna Hoffmann, Jobs marketing guru who seems to be at his side at every possible moment along the way. It seems she is more of his personal assistant/psychiatrist and the reasoning in his head to calm most situations.

Act 2 is based in 1988, Jobs has parted ways with Apple and he is about to launch NeXT, a product, at that stage, that is simply a lie, a calculated move from Jobs to stick two fingers up at Apple but at the same time make them wish they had never let him go. Then we fast forward yet again to 1998, Jobs back at Apple and very smug at the launch of the IMac and the very start of Apple’s domination.

With each of these different acts, Jobs is approached by the three constants in his career, Steve Wozniak (Seth Rogan), John Scully (Jeff Daniels), former head of Apple, and Andy Hertzfeld (Michael Stuhlberg) for a brutally honest chat.  Boyle at this stage brings in the flashback to take us on a visual journey to tell the story of what has happened in between each act and between the characters. Aided by a score which set’s the atmospheric mood for each scene, you would think all the heavy dialogue would be exhausting, making you want to switch off, but there is just something which keeps you gripped.

The stand out of the whole film is the sheer and utter class of this phenomenal cast as they bring this script to life; each scene is set against a countdown to show time and the tension that is built from cast performances alone, but it’s not all heavy drama. Fassbender delivers the arrogance, but he also intricately builds warmth for this man you would never expect, especially when he delivers comedic one-liners.

Kate Winslet also delivers probably one her best performances as Jobs right-hand man and the chemistry between Fassbender and her seem like a match made in heaven, there is something to be said about the approach British Actors bring to their craft.

Like the Social Network brought a human touch to the somewhat cold world of technology, Danny Boyle has made a cinematically enticing, warm-blooded story of determination and fatherly love that will keep you thinking long after you’ve left the cinema.

Steve Jobs is out in UK cinemas 13th November.