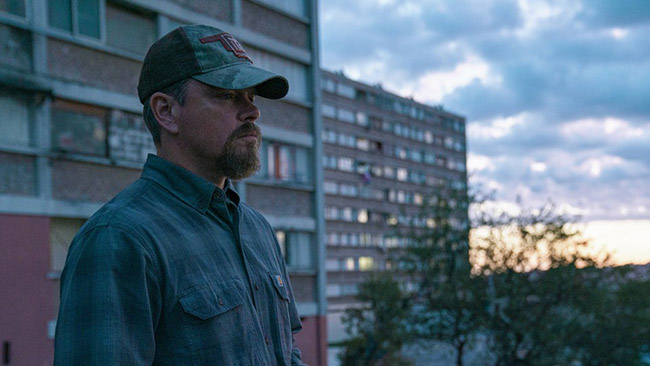 10 years in the making, Spotlight filmmaker Tom McCarthy finally give life to the Matt Damon led drama Stillwater. Loosely based and inspired by the Amanda Knox case, the young American woman who was acquitted having spent four years in an Italian prison after the murder in 2007 of her roommate. The film takes on the perspective of her red neck Father with the earnest growth of a single-minded character we would all associate with being a Trump ally.

The film sees Matt Damon take on the role of Father and unemployed Bill Baker as he travels from Oklahoma to Marseille to visit his estranged daughter Allison (Abigail Breslin). Imprisoned for a murder she claims she did not commit. Fuelled by a tip that could see her set free, Allison presses Bill to engage her legal team.  But Bill, eager to prove his worth and regain his daughter’s trust, takes matters into his own hands when said the legal team won’t proceed and he simply can’t afford any further expenses.

Broken down into what seems to be three acts, its Bills passion and obsessive behaviour of trying to do right by his daughter that brings the intensity and thrills to the table, but for a man that spends so long in a Foreign country trying to clear his daughter’s name, the ignorance of not even trying to learn the language rings loud as Bill is faced with language barriers, cultural differences, and a complicated legal system. Enter the meet-cute with French actress Virginie (Camille Cottin), mother to eight-year-old Maya (Lilou Siauvaud).

It’s the introduction of this readymade romance that lingers for what seems like an age and a day,  The story plods along nicely until Bill’s new friendship sees him trying to make up for the shortcomings with his own daughter with the young Maya, becoming stretched out and a bit of a bore-fest at best.

Damon’s performance as Bill comes across as muted, yes he plays the slightly dim redneck that prays at dinner and is ever so proud of his country with a penchant for a bit of violence with plausible believability but you can’t help feeling this one-dimensional character lacks any real gumption. Surprisingly, we get a whole lot more humour than you would expect from a drama of this substance. Mainly coming from the French quarter and Lulou Siauvaud’s Maya and the highly underused Camille Cottin in where she asks Bill if he voted for Trump only for him to answer no but that was because he was behind bars.

Tom McCarthy’s vision has its moments of thrills and uplifting humour but it takes on a very disjointed path that leads to a questionable resolution on a number of story points and an absurd route of justice. There is a story worth telling here if you scrap away the mildew, but this one is a far cry from the brilliance of Spotlight.