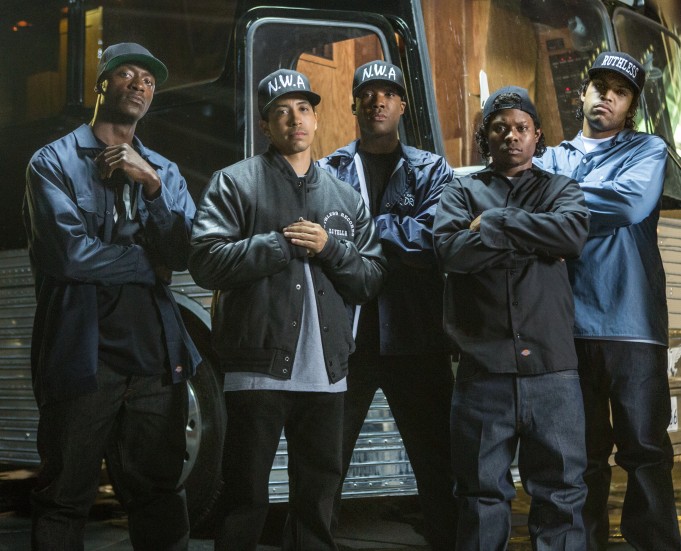 For months, there has been chitter chatter around this biopic, building the hype and getting most real Hip Hop fans just a little bit moist.

Straight Outta Compton covers the birth of NWA in the 80’s right through until Dr Dre (Corey Hawkins) saw right past Suge Knight’s (R Marcus Taylor) controlling and violent deeds to leave Death Row records and start up Aftermath. Along the way, we witness the coming together of Dre, Ice Cube (O’Shea Jackson) and Eazy-E (Jason Mitchell) from the mean streets of Compton, to the parting of ways of these legendary music names. It touches on the issues of the race brutality they experienced at the hands of the American police force, hence the title of track “Fuck tha Police” – the tensions in the country surrounding the beating of Rodney King in 1991 at the hands of the police. All very relevant to what is happening today; history is repeating itself yet again.

We witness the cause of the fall-out between Eazy-E, their then manager Jerry Heller and Ice Cube over a royalties dispute. Yes, Ice Cube was well and truly being screwed over and we get to see the reactions of Eazy-E and a few groupies when Ice Cube dropped his “dis” track to them, delivering which has to be one of the best comedic parts of the film. At this point, it does start to feel that the story has been polished up to make it feel more glamour than gritty and raw. It becomes obvious that the studio has tried to water this down for a more Hollywood feel. Straight Outta Compton isn’t all about the music, violence, and fall-outs, it’s also a buddy movie; it shows these guys were once close and all had a pretty close bromance. This is brought to the fore as we enter the touching moments of the film when Eazy-E is diagnosed with Aid’s. Dre, Ice Cube, and Eazy-E all make their peace with each other before the sad passing of Eazy which will leave even the most hardened amongst us just a little bit choked up.

Director, Gary Gray was exactly the right choice to direct this film, with many years experience behind a camera and his long association with NWA, who better to tell this tale of such a legendary hip hop group so accurately and enticingly? With Dre and Ice Cube as producers of the film, it was never going to be a story that was fall of inaccuracies. The cast are mainly unknowns but they certainly did their roles a hell of a lot of justice and all looked scarily similar to the characters they played, obviously Ice Cube was played by his son O’Shea Jackson, but R Marcus Taylor as Suge Knight was eerily spot on too.

However, they do miss out big chunks of their controversial history, such as their misogynistic and offensive lyrics, the well documented assault on then journalist Dee Barnes (who subsequently has not been able to work as a journalist since) and the rest of the negative issues they have had with women. The excuse given is that they couldn’t fit everything into two and a half hours, another excuse being Universal wanted to make this story one fitting the Hollywood image, is this really true or was this very conscious effort to leave out these issues in order not to tarnish their A-List celebrity status? What makes things even more contrived is the fact that just days after the American release of the film, Dre comes out with an “apology” for his treatment of woman in the past.

No matter what your views are on NWA, their brutal past, and their misogynistic lyrics, Straight Outta Compton is a must see film not just for your Hip Hop buffs but for all. This has to be one of the best biopic’s ever made.