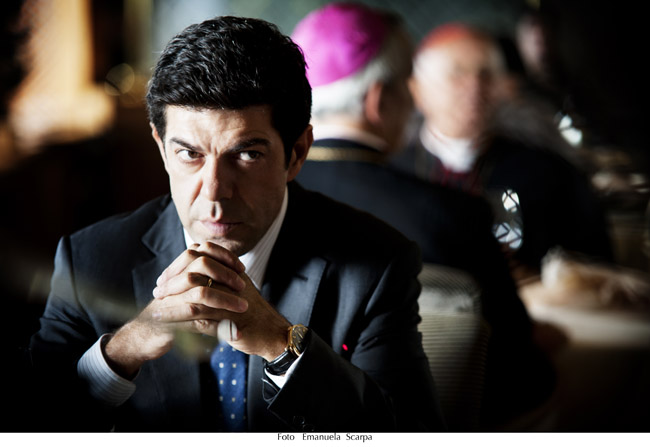 Once the heart of the Rome’s criminal world, Suburra holds many dark secrets, mainly never trust anyone to be completely what they may seem. Politicians, The Priesthood everyone has something sinister to hide.

Romanzo Criminale and Gomorrah Director, Stefano Sollima has a unique ability of bringing the Italian crime scene to life with extreme reality. In fact shooting for Suburra took place in the middle of a judicial storm that hit Rome back in 2011, what were the odds that the film he was working on bore a very close resemblance to what was going on around him at the time? Corrupt Politicians, Mafia, and Gypsy Crime Kings all come together in an interlinking yet powerful story which is set over the course of seven days leading to the ‘apocalypse’ with a horrifying crescendo. Corrupt Mafia families have one thing on their mind, to turn the waterfront of Rome into a new Las Vegas all fronted by former crime boss Samurai. Set mostly at night in the midst of a damp Rome, corrupt politician, Filippo Malgradi (Pierfrancesco Favino) embarks on a night of sex and drugs with two women of ill repute, one of which is underage and meets a premature end to her life. Not wanting to be connected with the young girl’s death he washes his ends of the tragedy whilst her body is taken care off. This one night is the catalyst of the chain of events that spiral out of control and leads Malgradi into a deep dark web he simply can’t escape.

We are taken into a number of different complex criminal worlds over seven days on a journey that is heavily laden with numerous criminal characters. Who, one by one, all meet a grisly demise as they are left with no choice but to sell each other out. Whilst each individual subplot is essential to this storyline and its flow is tight there is just a bit too much going on to keep up with but somehow it doesn’t fail to completely draw in its audience. For a long time the crime thriller has been stale and in need of a fresh injection of life, Director Sollima has proved with his previous ventures he was the right man for the job as he brings to a close his crime trilogy after two seasons of Romanzo Criminale. Suburra should place his name up there with the likes of Scorsese as his vision packs an almighty punch.

Suburra is out in Cinemas June 24.