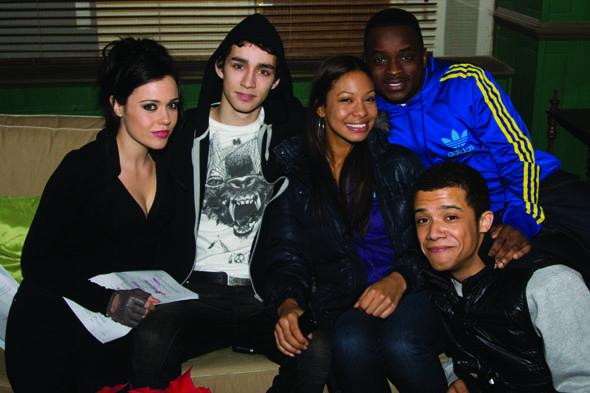 The talents of Hackney-born actor Idris Elba are known the world over.

Whether it’s as Stringer Bell from The Wire – one of the few men (other than Jay-Z) who has actually kissed Beyoncé – or in his Golden Globe-nominated performance as DCI John Luther in the BBC One drama Luther, his is a face and name that will have regularly have made your acquaintance.

However, the 38-year-old Arsenal fan is not just an actor, and throughout 2010 he has been making another name for himself as an award-winning executive producer.

Idris’ latest project is the teen slasher Suicide Kids, written and directed by British director Arjun Rose and starring a cast that reads like a Who’s Who of young British acting talent. Among them are Ashley Walters, Shanika Warren-Markland, Femi Oyeniran, Reggie Yates and Jason Maza. And as if that wasn’t enough, stars also along for the ride are Adulthood’s Jacob Anderson, Cherry Tree Lane’s Jennie Jacques and Misfits’ Robert Sheehan.

Delightful bloody romp
The film follows the lives of seven principal characters who have all made a suicide pact after their friend Amber (played by Tulisa from N-Dubz) takes her own life. However, just when they begin to have second thoughts, a crazed psychopath starts knocking them off one by one. During filming in London’s Waterloo, Flavour drops by the hive of activity that is the Green Room to find out more.

“It’s a delightfully bloody romp, with lots of sexy ladies’ faces dotted throughout!” remarks cheeky Irishman Rob Sheehan (who, by the way, is exactly the same as Nathan in Misfits) when we ask him how he would best describe the film.

Jason Maza, who also doubles up as one of the film’s producers, is more succinct. “I would describe it as a sort of teen slasher.”

Jenny Jacques takes her time to elaborate. “It’s different because it’s a definite slasher movie, quite gruesome in a lot of aspects, but it’s got this love story running through it, which I suppose is what really attracted me to it,” she observes elegantly. “It is quite a beautiful story between a boy and a girl, which is really nice to have behind a slasher and I haven’t seen that done before. Each of the characters have their own journey, and so for each one you actually do start having feelings for them – rather than just random characters with half a story, each one has their own little things going on and each character is very different.” Dark rabbit hole
‘Different’ is one way to describe the hodgepodge of characters that include a young black gay guy, a lonely college drug dealer and a mysterious, peculiar recluse. “My guy is the strangely dark and intense character, who is probably most likely to be guilty of bestiality,” Robert says of Archie. “What’s that one when you have sex with dead people?” Necrophilia… “Probably guilty of that as well; potentially so, if he was to go down a very dark rabbit hole of introvertedness! He enters into this suicide pact, very much on a subconscious level, in order to save the girl who he is most drawn to – the character of Jasmine [played by Jennie Jacques]”. But whom in fact is human. “She is a human being, but she has little whiskers under her chin that remind him of an old fox,” he states before bursting into laughter.

Lovely gallows humour
It would seem entertainment can be found off the camera just as well as on it, which is helped by an impressive cast of young up-and-coming British talent. “It was my intention to represent British acting talent,” says Jason about the casting process. “Arjun always wanted it to be a diverse cast as well, so I wrote a list of everyone I wanted – and was very, very lucky that I got everyone I wanted. I am very privileged that they agreed to come on board this very low-budget film.”

Before the actors get back to set we ask them why people should go and see Suicide Kids when it’s realised this spring. “If you are a fan of terribly black, black comedy and gallows humour,” pipes up Sheehan, “then this is right up your street.” “And,” adds Anderson, “coz it’s lovely!”

Suicide Kids is set for UK release in May. To find more about the film, follow it on Twitter at www.twitter.com/suicidekidsfilm