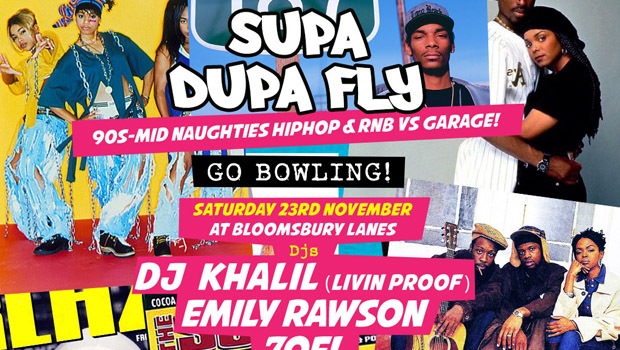 Supa Dupa Fly are back at London’s most entertaining venue for the third instalment ‘Supa Dupa Fly Go Bowling!’ Since launching in 2011, Supa Dupa Fly has become THE necessity in many 90s Hiphop, RnB & Garage lovers diaries. We’ve hosted acts including Jazzy Jeff, Rizzle Kicks, Rita Ora, Conor Maynard, Dj Yoda, Disclosure, EZ & Wookie as well as receiving notable press features from the likes of The Guardian Guide, The Evening Standard, The Metro, and Time Out. Hosting an arena at Lovebox in July is one of the festival highlights! Khalil is a DOPE hiphop Dj & Co-founder and dj at Livin’ Proof. He has played live on the Boiler Room on numerous occasions, and hosts a weekly show on highly respected internet radio station NTS.www.mixcloud.com/khalil

Emily Rawson is one of the UK’s most in demand Djs and promoters. She has recently dj’d and curated stages at festivals including BBC Radio 1’s Hackney Weekend, The Camden Crawl and Lovebox. She has done mixes for BBC Radio 1Xtra, and received numerous press features from The Metro, Evening Standard, Time Out and more. She was recently invited onto a the BBC World Service to speak about Women in Hiphop. She has just Dj’d a secret show for Eve at Shoreditch House and has played at parties from everyone from Kanye West to Saachi Gallery. www.mixcloud.com/djemilyrawson

7oel is one of the most diverse crowd pleasing party DJ’s playing in London. A resident at some massive nights across the musical spectrum including BUMP & The Bang Bang, expect a foot stomping, sore throat from sing-along-ing, t-shirt sweating set. www.facebook.com/DJ7oel

More on the door

Tables , Bowling & info: itssupadupafly@gmail.com  everyone that books bowling through us gets a free Supa Dupa Fly tee!