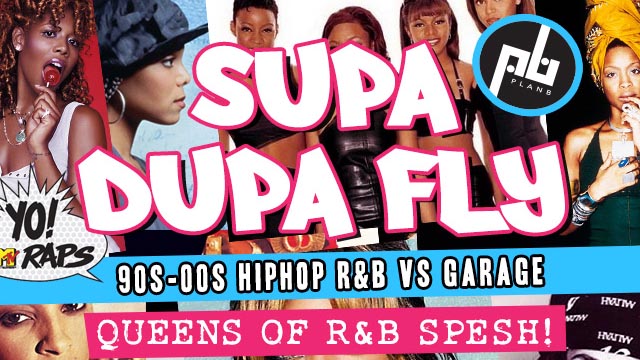 Since launching in 2011, Supa Dupa Fly has become THE necessity in many 90s & noughties Hiphop, RnB & Garage lovers diaries, selling out every event. SDF has now unquestionably become the biggest & most popular event of it’s kind in London, having hosted shows for Jazzy Jeff to Rita Ora, Dj Yoda to Disclosure, EZ & Wookie! Hosting arenas at festivals including Lovebox each year, as well as high profile shows at Shoreditch House have been some of the many highlights. There have been numerous high profile press features from Time Out, The Guardian, The Metro and The Evening Standard too… CJ Beatz is the BBC Radio 1Xtra DJ to watch out for. Holding down the ‘The RnB Show’ on Monday’s, he’s one of the biggest hiphop djs in the country. You can also hear him on BBC Radio 1 for two hours hosting ‘The 1Xtra M1X’ every 6 weeks. CJ started as Hip-hop Dj for DMC, and always KILLS IT at SDF!

Emily Rawson is one of the UK’s most in demand Djs and promoters. Her club night, Supa Dupa Fly is unquestionably the biggest throwback Hiphop & RnB night in the country, and her all female brand, Rock The Belles is also a regularly sold out event (see www.rockthebelles.com). Emily has recently Dj’d for everyone from high end fashion brand Chanel, to Nike parties and artists including Big Boi, Eve & Kanye West. Her festival DJ sets & stage curation include Lovebox, The Great Escape & Street Fest. Emily has done guest mixes for BBC Radio 1Xtra, the BBC World Service & received numerous press features from The Metro, Time Out, Le Cool & The Evening standard. She works with Shoreditch House & Soho House, under her brands, Supa Dupa Fly & Rock The Belles, where she has presented acts including Daley. www.mixcloud.com/djemilyrawson

Big Ted Big ‘Teddy’ Ted he IS Hip Hop! Supa Dupa Fly’s champion crowd pleaser and host like no other! His now legendary 10-year stint on Kiss 100 was home to a show that featured hip hop greats from Run DMC to Missy Elliot to Jay Z! He was recently on Radio 1 alongside Doc Brown. www.twitter.com/bigteddyted