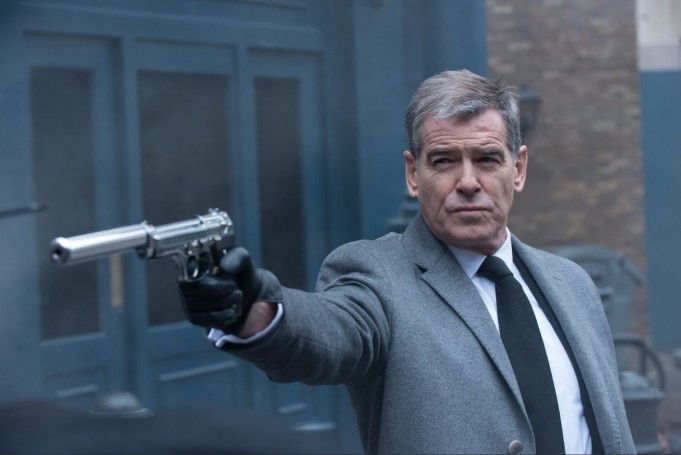 Oh dear, Oh dear, Oh dear…. That’s all this review should really read. Coming from the filmmakers of Olympus Has Fallen, Survivor is another action-packed ‘thriller’ that’s so dry and dead we wonder who in the hell is still employing these people.

Kate Abbot (Milla Jovovich) is working as a Foreign Service officer at the US Embassy checking for any would-be terrorists travelling to the States. Her suspicions are aroused when a scientist with a bit of interest in dangerous chemicals passes her way. No one wants to listen to her concerns which in the end leaves her reprimanded and told to leave well enough alone. Not willing to drop the issue she continues to pursue her gut instinct.

This only spells trouble for her, when said scientist has friends in high places and we soon see her in a restaurant which blows up, the bomb intended to kill her, doesn’t do the job. As she stumbles from the restaurant one of the world’s most wanted assassins, The Watchmaker (Pierce Brosnan) makes another attempt to kill her. Considering he is supposed to be so good at his job he certainly makes a hash of every attempt he has to take her out, which just leaves the script as a bit of an ongoing joke.

Soon enough, Abbot is framed for a murder and subsequently goes on the run, having her identity made public and blazoned across every TV screen across the UK; she wanders aimlessly through the streets of London while being hunted for her so called crime. She then makes her way to New York under a thinly veiled disguise and stops Times Square from a bomb attack.

Whilst the action sequences are well done, the endless amounts of killing become ever so tedious. It’s tried to jump on the bandwagon of the success of Bourne success but with a lack of a script with any real creative genius about it, each scene instantly becomes quite forgettable.

The storyline is just so ridiculously bad it could almost be considered a joke. Acting is equally bad with a host of wooden performances from the majority of the cast including Brosnan and Jojovich. It may be called Survivor, but this is one lame duck that should have been put out of its misery.

Survivor is out to own now on DVD and Blu-Ray.