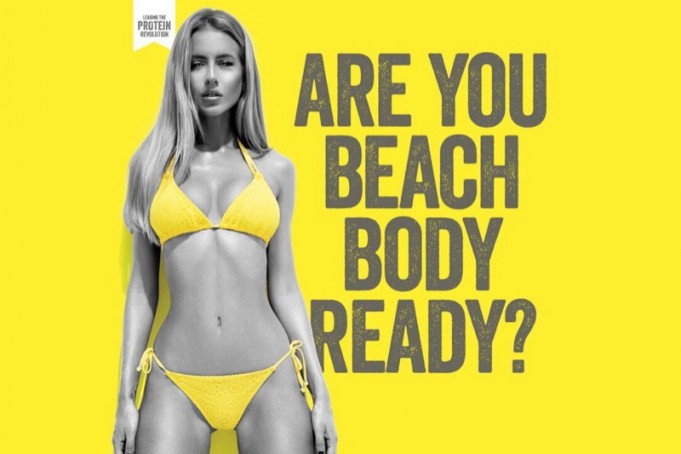 Have you seen the hoo-hah going on at the moment with the Protein World advertising campaign?

The controversy over an advert which asks ‘Are you beach body ready?’ seen below, got a petition of tens of thousands of signatures with body image campaigners and feminists condemning the advert.

The Protein World advert, which appears in London Underground stations, features a model in a bikini and is advertising the brand’s weight loss collection.

Many of the posters got defaced by the public, which were featured in the London Underground and then removed by TFL a few weeks after the controversy. Now SwimsuitsforAll has launched a new social media campaign in response to the controversial Protein World ‘Beach Body’ advertisement featured in the UK. hit back with their own advertisement featuring curvy model Ashley Graham, who also starred in Sports Illustrated Swimsuit Edition’s first plus size advertisement. The logo asked ‘Are You Ready for This Beach Body?’ with the hashtag #curvesinbikinis. Graham even says ,

“there is no reason to hide and every reason to flaunt” when it comes to the beach. Do you find the original ad offensive or is it just another way to advertise? Not only has Swimsuitsforall got involved but also Dove too. Dove’s photos says Yes. We Are Beach Body ready.

We also found this photo by Tara Castello stating, “How to get a bikini body, put a bikini on your body” And then things got a little bit hotter with blabber mouth Katie Hopkins jumping in to add more fuel to the fire.

Chubsters, quit vandalising @ProteinWorld ads & get your arse running on the road. Feminism isn’t an excuse for being FAT. #EatLessMoveMore

Ads for ‘beach body ready’ vandalised. Society has huge acceptance for being fat – but masses of abuse for being skinny @ProteinWorld

Off for a run. Angry chubsters – feel free to catch me and tell me about your ‘medical issues’ @ProteinWorld

What are your thoughts on the Protein Ads, do you think they should have been removed from the tube and that they are offensive to women? Leave your comments below. ARE YOU BEACH BODY READY!