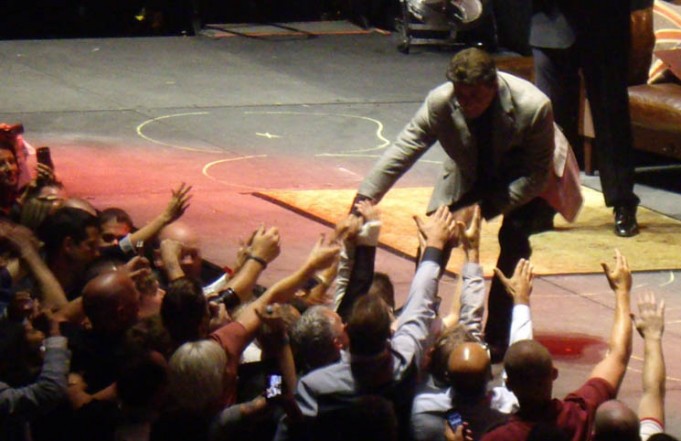 The biggest franchise movie star in Hollywood was in the UK on Friday night talking about Rocky, Rambo 5, The Expendables and lots more. Flavourmag was on hand for all the fun and excitement.

During his ‘An Evening with Sylvester Stallone‘ show at the Phones 4u arena in Manchester, the Italian Stallion told fans that Rambo 5 is “definitely happening”.

Having bulked up to 105 kilos for Rambo 4, Stallone showed the movie world that he still has what it takes as an action star but at 68 years young, he jokes that he probably wont be jumping out of a tree to “wrestle a boa constrictor”! Stallone’s vision for Rambo 5 sees him taking on a drug cartel. He says he wants to make the 5th film in the style of ‘No Country for Old Men’.

Thousands of people packed the arena in Manchester for a chance to hear the Hollywood legend and peoples champion speak. Sly, who was in the UK for an event promoted by OlexyFresh was genuinely humbled by the love and adulation shown to him. One lady showed him a tattoo she’d had done when he signed her arm at a movie premiere years earlier. Another man told him he’d named his son Sylvester and his daughter Talia (the real name of the actress that played Rocky’s wife; Adrian).

Most people know that Sylvester Stallone’s big break came with Rocky. Lots of people know that he wrote the film in 3 days, but did you know that the studio flat out refused to let him star in his own movie? Choices for the casting of Rocky included Burt Reynolds and Robert Redford. The line between Stallone and the Rocky character is a thin one because despite having no money, he turned down $350,000 to sell the rights.

Having slept rough in a Bus Station, Sly stuck to his guns, refusing to sell the screenplay unless he played the starring role. 6 movies later it’s fair to say the gamble paid off!

Recounting the shooting of Rocky IV, Sly says his original idea for the Ivan Drago character was that of a big, hairy, brawny opponent. When he saw a picture of Dolph Lundgren, a tall handsome, chiselled warrior… that all changed.

Stallone encouraged Dolph to really “go for it” in the boxing scenes. This was a decision that would lead to the peoples champion being sent straight to the hospital!

When Dolph punched Stallone in the chest during one of the scenes, he hit his heart so hard the doctors thought he’d had been in a car accident. Sly ended up with bruising, high blood pressure, and spent 5 days in intensive care. Ouch!

Now into it’s third instalment, The Expendables has captured the imagination of action movie lovers everywhere. The idea of banding together stars from the past and creating a box office smash is a stroke of genius. So where did the idea come from?

Sly says he was sitting in his office one day wondering where some of his pals were. He’d seen rock bands reform and the nostalgia that it brought, and he wondered if he could apply the same idea to a movie.

Some stars took more persuading than others (he convinced Arnold Schwarzenegger to take part in a days filming on the first movie – whilst governor!), his idea succeeded and the cast of the Expendables reads like a list of ‘anyone who is anyone’ in the action genre. Now the movie has become a franchise and actors are clambering to be part of it.

Sylvester is getting a reputation in Hollywood for giving actors a second chance at the big time. For some; Mel Gibson may have been an odd choice to play the lead villain role in the latest Expendables outing. In truth the ‘Lethal Weapon’ star has proved to be one of the best things about the action packed movie.

Sly says that Mel (who is 58) took the role very seriously and hit the gym hard in preparation. Mel was photographed in LA last year training for the gruelling shoot in Bulgaria.

After the Expendables 3 leaked online last week, Stallone jokes that he will only make another sequel if people “Stop downloading it!”. The movie was reportedly downloaded 200,000 times in the first 24 hours of it leaking.

Assuming there is an Expendables 4, Sly says he expects the villain to be more intellectual in order to make use of technology. He expects the next bad guy to be less physical, although he will likely be backed up by a burly entourage. Although Stallone was in good spirits as he joked “this is unless The Rock wants to get his ass kicked!”

Sylvester has given some insight into how he uses his body to help portray a character in a way that fits the plot.

He says that his vision for Rocky Balboa in Rocky III was that of someone who was pampered and vein. If you look at Stallone during that movie he is incredibly toned and ripped. In contrast, John Rambo (in Rambo 4) wouldn’t have had access to a gym, his training would have been much more rugged. As such his physique is much thicker and bulkier which makes him more intimidating.

For millions, no one is a bigger inspiration than Sylvester Stallone. He is the ultimate symbol of success through hard work and determination. For many, his story is an illustration of what is possible if you never stop striving.

During his talk in England the ‘peoples champion’ expressed to the entire audience that they should “grab the world by the throat” every day and never give up. He said that so many people are just “existing” when they could be chasing their dreams. Sly said that getting Rocky 6 made was one of the toughest things he ever went though. The studio’s thought of him as ‘finished’ and it was up to him to prove he was still relevant. Sly’s life story speaks to every race and generation and serves as a message that the world doesn’t owe you anything… you owe it to yourself to succeed. That’s a great message to take away from an evening with a Hollywood superstar.