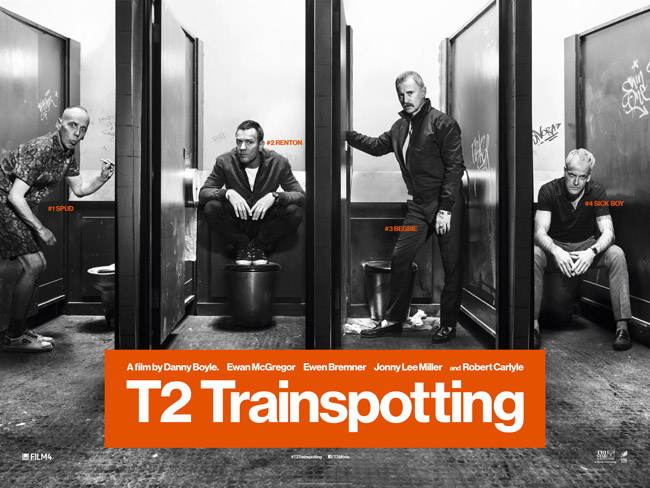 A lot of people have waited patiently for the sequel to Danny Boyle’s Trainspotting since last year’s planned release date.

The most patient of all have waited 20 years, as Boyle himself has stated in his own words. Ultimately, the potential for success and accolade of this film rides on the shadow looming over it. If not carried out just right, there’s an awful long way to fall. But as the saying goes, ‘good comes to those who wait’; though T2 Trainspotting is far from good; it’s phenomenal.

Twenty years have gone by for Mark Renton (Ewan McGregor) and his estranged group of junkie pals. Returning home from a new life in Amsterdam, funded by his betrayal-ridden stolen money, he encounters each of his childhood friends and attempts to reconcile his wrong-doing. His return and peace offering is a slap in the face to Simon/’Sick Boy’ (Jonny Lee Miller), who avidly resents Mark for stealing his chance for a changed set of circumstances, as he currently scrapes through life by manning his relative’s public house. Suffering on much more intense terms is timid old Daniel/‘Spud’, who is “back on the skag” and looking for a reason to live. Enter Mark who offers him a friendly face of encouragement, giving him enough to hold onto for now. Violent Franco Begbie, unsurprisingly, has been serving the last 20 years in prison. Full of rage, he manages to escape at a perfect, or more appropriately, unlucky time, just as Mark is back in town. Each performance is exemplary and the iconic characters are given a rich and important story which they truly deserve. They’ve not lost their true essence but it’s made clear how time has worn them down, both physically and characteristically. What Renton did to each of them at the end of the previous film had large consequences on their lives, and in their reunions, this is communicated through their desperation, their hostility, or their fury. A standout performance comes from Ewen Bremner; his utter embodiment of becoming ‘Spud’ is astounding.

Alongside this exploration, T2 delicately, for the most part, acknowledges the changes in society, particularly what people’s values are now, without being too ‘Black Mirror’ about it. Some references to the technological world may be a little on the nose, but other than speech and the use of modern phones, nothing is thrust in your face visually; something which would dilute the impact when trying to live up to the original and recreating something of the same nature.

The strong narrative is elevated and supported by extraordinary execution, without missing a drop of what made Trainspotting so iconic. Not one element is solely at the forefront when considering recreating the original film’s profane, in your face, and rebellious style. Crooked and twisted angles, gut-punching noise, a tonally impeccable soundtrack, editing that thrusts you from one absurd and ludicrous crisis to another; this delivery is a labour of not only love but undeniable talent.

What Trainspotting did for cinema as a piece of British realism was so impactful. Boyle has taken this stance and cast a lens on exactly the same dismal spot 20 years later. The film, like the characters, is the same fundamental being but is now surrounded by a new set of brutal circumstances. This is exactly why T2 doesn’t suffer from sequel syndrome. Its personality is raucous, turbulent, unruly and ultimately is a plain trouble-maker. That’s its charm and Boyle has made sure it didn’t lose an ounce.

To go back to Edinburgh and recreate an experience like Trainspotting, for which people have waited two decades, is a tall order. While nothing will be able to reach the heights of the original, T2 Trainspotting gives audiences back something worthy of their continued adoration of these momentous characters and their stories.