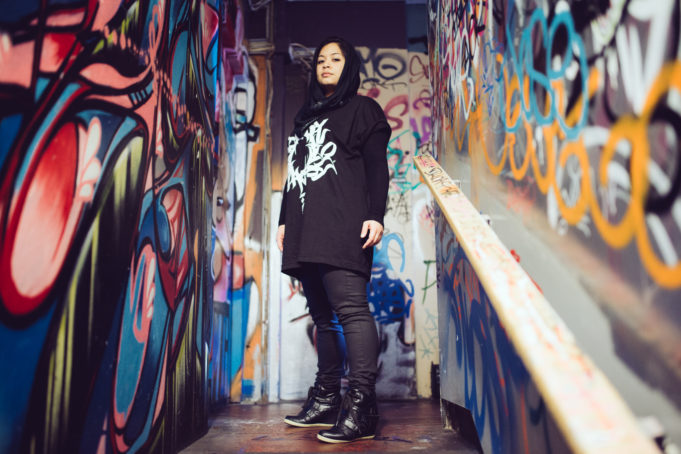 Hailing from Sydney, Australia, rapper Zeadala creates music with the intention of changing the future. Her lyrical content is one that makes you stand up and believe in what you think is right.

She’s a political rapper that has only one message, we as humans are in fate of our own future. Her latest offering ‘Your Hands’ featuring Mack Fyah produced by Fermi showcases just this.

We sit down with Zeadala and chat about how Australian can treat it’s First Nations Peoples better and the importance of rapping about social issues.


Tell us about your new single and what inspired it?
We wanted to start a conversation in regards to self-belief- “you’ve got the power in the palm of your hands”. There are so many things we can do with our hands to create positive change. Such as writing, creating a piece of art that makes someone feel something, meditation or prayer, offering a helping hand or showing support and solidarity. In the studio, we heard a really strong beat produced by Fermi and we were instantly inspired to create a song that would spark something further, particularly in people who may be carrying crippling self-doubt. In saying that we totally acknowledge the structures and frameworks that are built against minority groups, the types of structures that oppress, marginalise make some lose hope. The song touches on this too, on the idea that we must break through hopelessness and activate ourselves if we are to create any kind of change. There is work to be done. But it’s the type of work that we cannot do alone, it requires a community to stand together as a united force. To hold one another during the hard times and the confusion.


What do you think Oz can do to treat its First Nations Peoples better?
I think it’s about respect and acknowledgement and really understanding what it means for First Nations Peoples to be the traditional custodians of the land. Their authority to make decisions for themselves, should be championed and very much at the forefront of government, institutions, business and communities. I believe Australia could really benefit from having more First Nations leaders in Parliament. For example, First Nations People understand the land and its countries, its needs and Indigenous Affairs more than our current leaders could. They just don’t have the lived experience or connection to the deep knowledge to be making such decisions on the behalf of a whole people’s existence. There is so much we can learn from traditional cultural practices. However, due to our utter lack of respect and understanding about the stolen land where we stand, many Australian native fauna and flora have been on the decline due to land clearing and horrifyingly destructive environmental practice. Sometimes we just need to stand aside and listen. To learn from Australia’s First Nations People who have lived here for thousands of years.


What other projects are you working on?
I am currently working on my EP which is due to release in early 2019. Listening over some of the recordings lately, I sense a strong 90s influence. Very accidental. I guess I love and am influenced by 90s R&B and Hip Hop more than I think I am.


How did you first start rapping?
I started rapping in 2004 when I had an opportunity to create Hip Hop tracks for a theatre production by Claudia Chidiac called ‘Tough Beauty.’ She brought on MC Trey to mentor me who taught me how to count bars and go from being a singer-songwriter to rapper! Growing up admiring MC Trey on the many stages I couldn’t say no. I was very honoured and humbled by the experience. I also worked with The 26th Letter where I had my first studio recordings and even recorded a video clip for one of the songs from the production- Journey.


Will you always rap about social issues?
I will always rap about what I feel and what I see. Living in the world we do there are so many social issues such as homelessness, unemployment, discrimination, environmental destruction and religious conflicts that are yet to be solved. It’s important to me to use my platform to raise more awareness about these and to offer my ideas in terms of a solution. That is not to say I have the answers. But what I want to do is start the conversation as opposed to ignoring the facts. In saying that, I rap about so many aspects of life and the human experience. I can’t tell you how many love songs I’ve written. My heart is full of love so perhaps too many!

If you collaborate with anyone in the world, who would it be?
I would collaborate with Lauryn Hill. She’s timeless and relevant and such an amazingly talented artist. What a dream that would be.

What Aussie Hip Hop artists are you listening to and are on your radar?

I am currently listening to Queen G, Izzy n The Profit, DOBBY, Mirrah, L-fresh The Lion, Maya Jupiter and Baker Boy. There are so many dope up and coming artists that are blowing my brains out! Loving it.